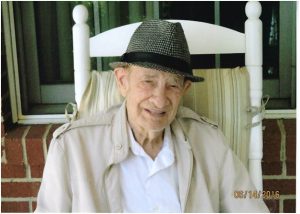 He was born April 7, 1933, the only child to the late Jessie James and Anna Pearl Bare Honeycutt. O.J. was a graduate of Stony Point High School and served in the United States Army from 1953 until 1957.

O.J. was a simple man. He enjoyed playing any kind of cards, day or night, with his buddies at the VFW. He enjoyed the Waffle House, Pepsi, vanilla ice cream, and the Andy Griffith Show.

In addition to his parents he was preceded in death by his former wife and mother of his children, Helen Marie Fullbright Honeycutt.

O.J.’s request was to have a private service. A private service was conducted on Monday, March 20, 2017 at the Chapman Funeral Home Chapel. Rev. Rich Mitch Rash officiated. Burial followed in the Stony Point Cemetery.

Condolences may be emailed to the Honeycutt Family by visiting our website at www.chapmanfuneralhome.com.