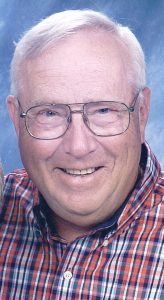 Rohe Lewis Winchell, 84, of Taylorsville, passed away in Catawba Valley Medical Center, on May 17, 2017, following a brief illness.

He was born November 6, 1932, to the late Alfred Main and Mary Prescilla Hickman Winchell, in Waterbury, Connecticut. His career as a financial adviser spanned several industries and financial institutions. He faithfully attended East Taylorsville Baptist Church.

He attended the University of Connecticut, where he majored in music. His love for classical music led to being a choir boy and playing the pipe organ for his church. He later directed choral music.

He loved man’s best friends, remembering Victor, Taffy, and Gilda. Rohe was a Master Gardener and was passionate in the yard and garden. He especially enjoyed flags and Christmas lights.

Celebrating family accomplishments and carrying on traditions surrounding Memorial Day and Thanksgiving with Mince meat pie was always a highlight.

In addition to his parents, he is preceded in death by a special aunt, Ruth Yarrington.

Mr. Winchell is survived by his wife of twenty years, Mary Ann Hayes Winchell of the home; along with one son, A. Dowe Winchell and Jody Carpin of Greenville, South Carolina. His daughter, Nancie Ellen Winchell Fernandez and husband Jeffrey of Carlisle, Massachusetts cherish his memory. He has one stepson, Eric Hayes Mauney and wife Vickie of Taylorsville. There are four grandchildren, Jesse Joseph and Chelsea Ellen Fernandez of Carlisle, Massachusetts, with Ezra Pennell of Taylorsville, and Kaylee Paige Carpin of Greenville, South Carolina. One favorite cousin survives, Edward Lewis Yarrington of Prospect, Connecticut.

Funeral services will be conducted on Saturday, May 20, 2017, at 11:00 a.m., at East Taylorsville Baptist Church, with Rev. Jamie Steele and Rev. Gary Jennings officiating. Burial will follow in the Linney’s Grove Church Cemetery. The family will receive friends at the residence.