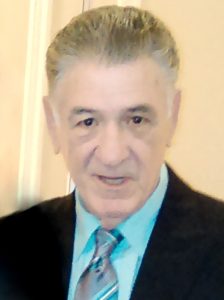 Michael George Rhyne, 74, of Taylorsville, passed away Saturday, May 20, 2017 at his residence.

He was born January 7, 1943, in Canton, son of the late Charles Rhyne and Ruth Scroggs Rhyne. He made his career in the furniture industry as a Quality Control Manager at Mitchell-Gold Furniture.

He was a member of Calvary Baptist Church and was a veteran of the U.S. Navy. He loved fishing and farming–especially his garden.

In addition to his parents, he was preceded in death by three brothers, Jerry Rhyne, Charles Rhyne, and Dick Scroggs; three sisters, Peggy Hoxter, Linda Long, and Shirley Whitt; and a step-son, Jeffrey “Tater” Wike.

Visitation will be Saturday, May, 27, 2017, from 12:30 p.m. – 2:00 p.m., at Calvary Baptist Church. Funeral services will follow, at 2:00 p.m., with Rev. Stephen Dagenhart officiating. Burial will follow in the Taylorsville City Cemetery. Military rites will be provided by DAV Post 84/Taylorsville and Chapter 6/Hudson.