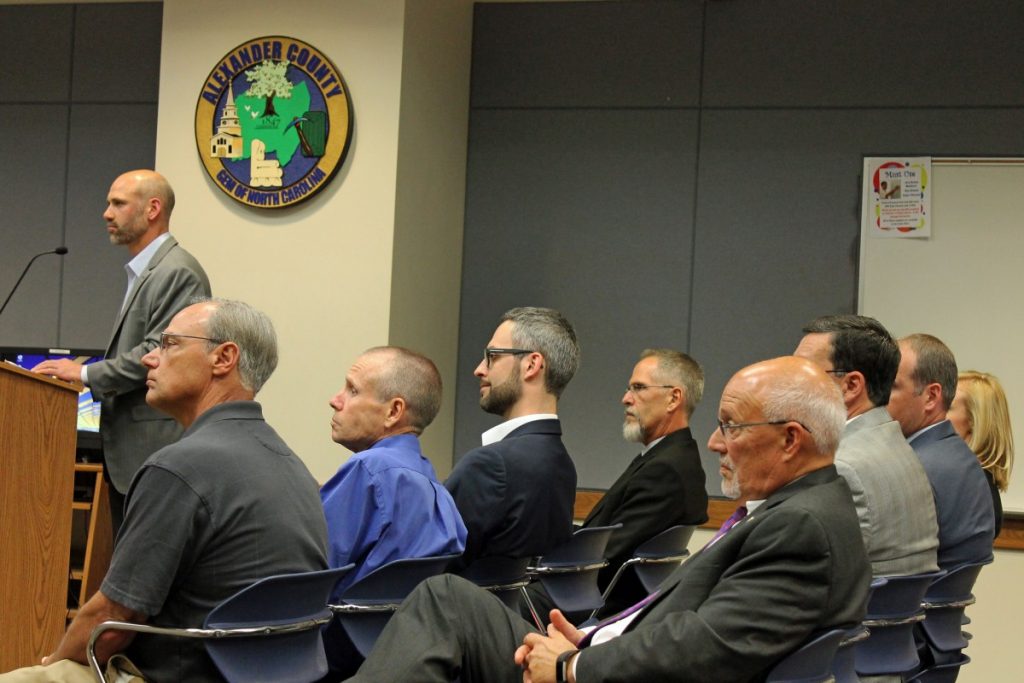 Ken Wiecoreck, President of Borealis, was present at Tuesday night’s meeting along with his colleague Jakub Oliverius, who is the Business Development Manager for the company’s automotive division in North America.

It was announced on Tuesday night, May 23, at the Alexander County Commissioners’ meeting, that a new industry will locate in Taylorsville soon and will employ approximately 37 people.

Borealis, a global company which produces and sells polyolefins, base chemicals, and fertilizers, will build a dedicated automotive polypropylene (PP) compounding plant in Taylorsville in the new speculative/shell building. The existing building, located on NC 90 east of town, was recently built as a joint partnership between Alexander Railroad Company and the Alexander County Economic Development Corporation. The company is purchasing the 50,000 square foot Alexander Railroad Shell Building, and plans to initially invest $15 million in the new plant.

A rail line will be constructed to the side of the Borealis plant and the interior construction is expected to begin in late 2017 and continue well into 2018.

A company media release from Borealis noted that the Taylorsville plant is scheduled to become operational in 2019 and will initially produce PP compounds in the Daplentm family of PP thermoplastic olefins (TPO) and in the Fibremod range of PP short glass fibre (SGF) reinforced materials.

Wiecoreck noted that the company is founded on core values of being responsible, respecting others, exceeding, and “Nimblicity” or being fast, flexible, and seeking smart, simple solutions.
Alexander Railroad Company President Ben Zachary noted, “The railroad being the developer and the service provider for the building allowed us to set the bar high when it came to recruiting. We wanted a clean manufacturer, a good corporate citizen, we wanted a significant bump in the tax base for industry, we wanted well-paying jobs, and wanted rail use. I’m proud to say that Borealis cleared that bar.” Zachary also complimented Alexander EDC Director David Icenhour for his professionalism and enthusiasm.

Commissioners thanked Borealis leaders for choosing Alexander County. They also thanked all those who helped bring the announcement about, including Icenhour.

“We are pleased with the confidence they [Borealis] has placed in us and we look forward to that relationship developing,” said Icenhour.

In addition to NC Commerce and the Economic Development Partnership of North Carolina, other key partners in the project include the NC General Assembly, the NC Dept. of Revenue, NC Department of Transportation, the NC Community College System, North Carolina Railroad, the Alexander Railroad Company, Alexander County Government, and the Alexander County Economic Development Corporation, according to a press release from Governor Roy Cooper’s Office, distributed at Monday’s event.