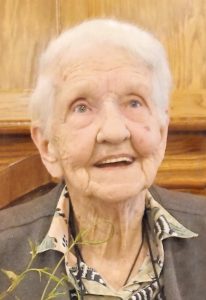 Joesphine Wave Bumgarner Watts, 95, of Taylorsville, passed away at her home on Thursday, May 25, 2017.

She was the daughter of Edgar Bumgarner and Wave Swaney of Arkansas. She was a faithful member at Lebanon Baptist Church.

Along with her mother and father, she was preceded in death by her husband, James Hugh Watts; four brothers, and two sisters.

Memorial donations may be made to The Gideons International, Taylorsville Camp, PO Box 517, Taylorsville, NC 28681.