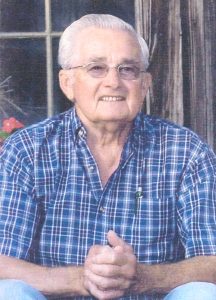 Elwyn Junior Bostian, 85, of Taylorsville, passed away on Wednesday, May 31, 2017 at Valley Nursing Center.

He was born February 3, 1932, in Alexander County, son of the late Thomas Chase and Luda Bowman Bostian. He was a faithful member of St. Peter’s Lutheran Church and was a veteran of the United States Army. Elwyn was an avid fisherman and birder who loved to feed and raise game birds as well as rabbits.

He was preceded in death by his wife of 52 years, Anna Lee Travis Bostian; and siblings, Tommy and Elbert Bostian, Pauline Carrigan, and Margie Smith.

Visitation will be held on Sunday, June 4, 2017, from 4:30 p.m. – 5:30 p.m., at St. Peter’s Lutheran Church, in Conover, with the Funeral Service following, at 5:30 p.m., with Rev. Kevin Graudin officiating. Burial will follow in the church cemetery. Military Rites will be provided by DAV Chapter 84 of Taylorsville, and Chapter 6 of Hudson.