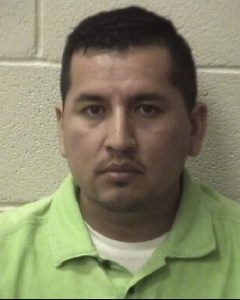 A Taylorsville man is facing charges of indecent liberties with a child, according to law officers.

On Thursday, May 18, 2017, investigators from the Alexander County Sheriff’s Office received a report from Alexander County Department of Social Services regarding possible sex abuse to an 11 year old.  Through an ongoing investigation, in conjunction with Alexander County DSS and the Dove House Children’s Advocacy Center, it was learned that the suspect in this case was 34 year old Edgar Alrcon Romero, of Taylorsville.  In a joint effort with the State Bureau of Investigation, Mr. Romero was charged on Tuesday, June 6, 2017, with two counts of Indecent Liberties with a Child. Romero was taken into custody and placed under a $150,000 Secured Bond, according to Sheriff Chris Bowman.

Romero had his first appearance on these charges on Wednesday, June 7, 2017, in District Court before Judge Edward Hedrick IV. Attorney Daryl Davidson was appointed to represent Romero. The case is continued until Monday, June 12, 2017, in Alexander County District Court.