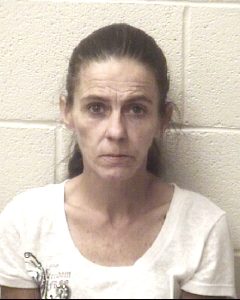 A Granite Falls woman faces charges after eluding officers from two counties in a vehicle chase.

On Sunday, June 11, 2017, at approximately 5:21PM, a car was observed speeding and failing to stop at a duly erected stop sign along with a stoplight at the intersection of Shiloh Church Rd and NC Hwy 127 in Bethlehem, according to Alexander County Sheriff Chris Bowman.

An Officer with the Alexander County Sheriff’s Office attempted to stop a white Honda Civic by activating blue lights and siren. The vehicle proceeded on NC Hwy 127 into Catawba County. The vehicle refused to stop. The pursuit of the vehicle proceeded into Catawba County for approximately 6-7 miles, back and forth on various streets in the Kool Park/Springs Road area. Hickory Police Department was notified to assist in the pursuit of the vehicle. At or near Shell’s BBQ, 28th St Dr, Hickory Police Department attempted to block the suspect in behind the Fresh Air Galaxy, where the driver also eluded them. The Hickory Police Department identified the registered owner and suspect as Cathy Michelle Chapman, W/F, age 50 of Granite Falls. The suspect was able to elude arrest by driving over a curb.

Cathy Michelle Chapman was charged with Felony Flee to Elude Arrest with Motor Vehicle, Reckless Driving, Driving with License Revoked, and Fail to Stop at a Stop Sign. She was transported to the Alexander County Law Enforcement Center, where she was placed under a $25,000 secured bond with a first appearance date of Monday, June 12, 2017 in Alexander County District Court.