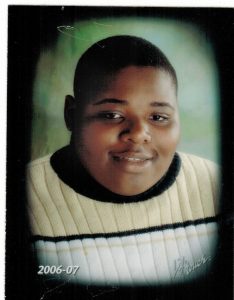 He was preceded in death by his grandparents, Joseph and Creola Moore; and a sister, Tikia Moore.

He leaves to cherish the memory of his life his mother, Janet Lucinda Moore; two brothers, Keith (Brittany) Moore of Taylorsville, and Johnny (Chelsea) Moore of Hickory; a sister, Jasmin Moore of Boone; an aunt, Maria Moore of Hiddenite; a great-aunt, Thelma Ramsue of Cleveland; special cousins, Terrence Moore of Norcross, Georgia, Safiyyah Hassan of Chicago, Illinois, Dominique Moore of Hiddenite, Sheryl Bye, Derrick Bye and Kiala Bye, all of Conover, and Keisy Parsons of Taylorsville; and other relatives and friends.

A Celebration of Life Service will be conducted on Tuesday, June 27, 2017, at 12:30 p.m., at Third Creek Baptist Church. Members of the family will receive family and friends at the church from 12·12:30 p.m. Reverend Tommy Carpenter, Pastor, Minister Maurice Lackey will officiate and give the eulogy. Burial will follow at Third Creek Baptist Church Cemetery, Stony Point.

Visit the Book of Memories for Mr. Moore at rutledgeandbigham.com.