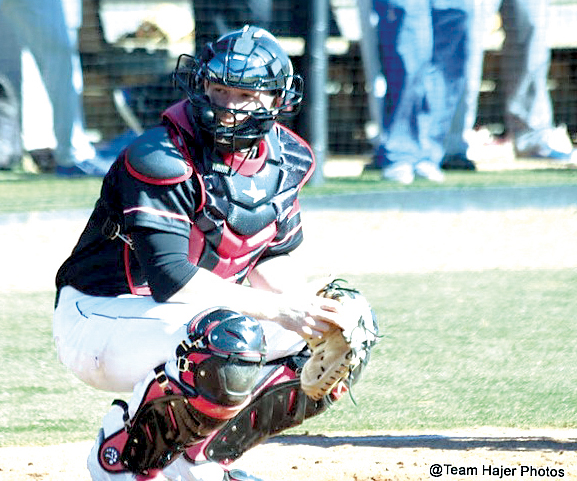 After notching their 6th connective All-American the Catawba Valley Community College baseball team notches their 3rd consecutive ABCA/Rawlings Gold Glove Winner.  Sophomore catcher Riley Smith (Alexander Central HS) has been named the NJCAA DII Gold Glove Catcher of the year.  The team consists of one player at each position with Smith claiming the Gold Glove in one of the toughest defensive positions for fielding percentage.
Playing in 53 games on the season, Smith logged a team high 275 putouts on 298 chances with 21 assists while only posting 2 errors on the season.  His .993 fielding percentage was the best among NJCAA catchers nationally with over 150 chances.  Smith also posted a Region best 10 runners caught stealing on 30 attempts this season for a .333 runners caught stealing percentage.  Smith allowed only 3 passed balls on the season.
Smith transferred to CVCC after playing one season at UNC Asheville, and has signed to play at Appalachian State University to continue his education and playing career next season. He is  a 2014 graduate of ACHS and is the son of Lisa and Roger Smith of the Ellendale Community.
About ABCA/Rawling Gold Glove Teams
The ABCA/Rawlings Gold Glove Teams are released by the American Baseball Coaches Association and Rawlings Sporting Goods in nine divisions of amateur baseball, from NCAA Div. I to High School. The Rawlings Gold Glove winners have been selected since 2007 in the collegiate and high school ranks, featuring many future Major League Baseball players.
The ABCA/Rawlings Gold Glove Awards are selected by ABCA coaches committees at each level: NCAA Divisions I, II and III, NAIA, NJCAA Divisions I, II and III, Pacific Association Division, and High School.
The ABCA/Rawlings Award Program is one of the most comprehensive in all of sports, awarding All-America Teams and Gold Glove Teams in nine divisions of amateur baseball as well as All-Region Teams in five divisions.
The ABCA, founded in 1945, is the primary professional organization for baseball coaches at the amateur level. Its over 8,000 members represent all 50 states and 25 countries. Since its initial meeting of 27 college baseball coaches in June 1945, Association membership has broadened to include eight divisions: NCAA Division I, II and III, NAIA, NJCAA, Pacific Association Division, High School and Youth. The 74th annual ABCA Convention will be held Jan. 4-7, 2018 in Indianapolis, Indiana.
About Rawlings
Rawlings Sporting Goods Company, Inc. is an innovative manufacturer and marketer of sporting goods worldwide. Founded in 1887, Rawlings is an authentic global sports brand, trusted by generations of athletes of all skill levels. Rawlings’ unparalleled quality, innovative engineering and expert craftsmanship are the fundamental reasons why more professional athletes, national governing bodies and sports leagues choose Rawlings. Rawlings is the Official Ball Supplier and Batting Helmet of Major League Baseball®, the official baseball of Minor League Baseball™ and the NCAA®, and the approved baseball, basketball, football and softball of the National High School Federation®. For more information, please visit Rawlings.com or by phone at (314) 819-2800.