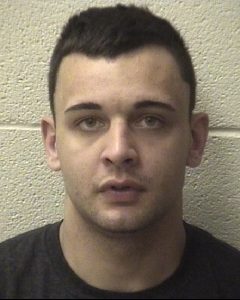 A Taylorsville man faces several charges after authorities say he shot into the air while driving near other motorists on an Alexander County road this week.

On Wednesday, June 21, 2017, at approximately 8:00 PM, Alexander County 911 received a call in reference to shots being fired from a vehicle that was traveling on Millersville Road, toward Hwy 16 South, according to Sheriff Chris Bowman. The vehicle was traveling on Millersville Road when it passed two motorcycles, with a vehicle occupant pulling a weapon and firing shots into the air during the passing.

The description of the vehicle given to 911 was a black Lexus.  A short time later, officers stopped a black Lexus matching the description of the vehicle that was given out at the intersection of Wayside Church Road and Rink Dam Road. Officers found that Michael Dwayne Stacy, II, age 25 of Stacy Lane, Taylorsville, was operating the vehicle.  The vehicle was also occupied by a white female and a young child. Upon a search of the vehicle, a Glock 22 handgun was located and seized from the vehicle. The serial number on the handgun was checked through NCIC and came back as reported stolen out of Burke County. Investigation showed that the weapon belonged to an Avery County deputy.

Stacy was charged with Possession of a Firearm by Felon, Felony Possession of Stolen Property, and Going Armed to the Terror of the Public.  Stacy was transported to the Alexander County Detention Center, where he was placed under a $20,000 secured bond with a first appearance date of June 26, 2017, in Alexander County District Court. The Alexander Dept. of Social Services was notified of the incident, due to the child being present.