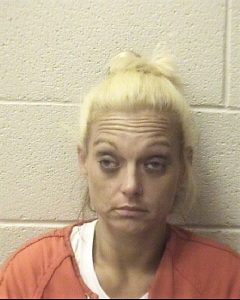 The Taylorsville Police have arrested a local store customer after she challenged a police officer to physical contest, which alerted police to other problems.

On Sunday, June 25, 2017, officers of the Taylorsville Police Department arrested Jessica Maureen Bridges, age 36 of Statesville, for variety of drug charges. Bridges drew attention to herself by challenging an officer patrolling the Taylorsville Walmart to arm wrestle.

When the officer declined the challenge she noticed Bridges appreciable impairment and began to investigate. Bridges was found to be in possession of Methamphetamine, Buprenorphine and drug paraphernalia.

In addition, Bridges was wanted for three felony indictments from Catawba County on charges of selling meth. She also had an outstanding warrant from Iredell for assault. She was placed under a $73,000 bond.