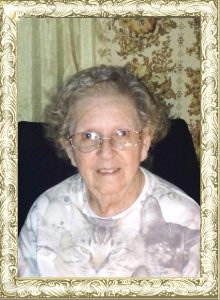 Helen May Smith, 93, of Rocky Face Church Road, Hiddenite, passed away Thursday, July 6, 2017 at her residence.

Mrs. Smith was born March 12, 1924, in Litchfield County, Connecticut, the daughter of the late Milton Jackson and Helen Chapman Hoehne.

Including her parents, she was preceded in death by her husband, Chester A. Smith, Jr.; a sister, Maxine Stalter; and a brother, Arther Hoehne.

Those left to cherish her memory include her daughter, Susan Ryan of Hiddenite; a son, John Marcinowski of Little Ferry, New Jersey; four grandchildren; and two great-grandchildren.