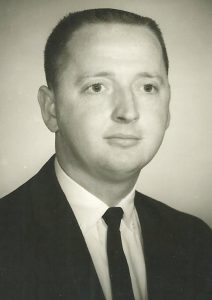 Mr. Kerley was born April 9, 1934, in Alexander County, the son of the late William Sherman Kerley and Della Treadway Kerley.

He was a US Army veteran who had served in the Musan-ni Korean Conflict, near Panmunjom, with the United Nations Command Military Armistice Commission.

After serving in the US Army, he attended Rutledge College in Spartanburg, South Carolina. Kenneth had worked as the Administrator of County Club of Salisbury, and was a member of Pleasant Hill Baptist Church. He enjoyed collecting and selling antiques.

Including his parents, he was preceded in death by three brothers, Asa Kerley, Thurston Kerley, and Vaughn Kerley.

The funeral service will be held at 3 p.m., Sunday, July 23, 2017 at Pleasant Hill Baptist Church. Rev. Chris Goforth will officiate. Burial will follow in the church cemetery, with military honors accorded by DAV Chapter 84 of Taylorsville. The family will receive friends 2-2:45 p.m., prior to the service.