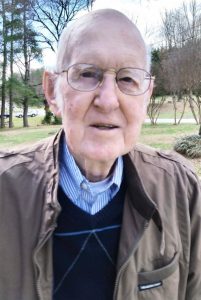 Jay Clyde Fox, 92, of Taylorsville, died peacefully, at his home, with his family around him on Saturday, July 22, 2017.

Mr. Fox was born on June 28, 1925, in Alexander County, son of the late Arthur J. and Willie F. Fox. He grew up in Taylorsville and loved telling stories of his life experiences, especially those from his early teenage years working at The Old Town Tavern and the Silver Moon.

Realizing that there were better things in the world, Jay Clyde joined the US Navy, in 1943, and proudly served in the Pacific Theatre as a Seaman 1st Class Gunners Mate on the U.S.S. Banner until the end of WW II, when he returned and enrolled at Appalachian State Teachers College. While at Appalachian State, he wrestled, played football, and was a member of the “Duggins Boys,” a group of players who played at App and still support ASU athletics 60+ years later.

Upon his graduation in June 1953, he returned home to Alexander County where he taught and coached at Stony Point High School for a few years. He then went on to obtain a Master’s Degree in Social Work from Florida State University and worked for various state agencies including Civil Defense, local DSS agencies, and retired from the NC Department of Social Services as Quality Control for the Western Region of North Carolina.

Mr. Fox was a faithful member of Taylorsville Presbyterian Church for over 55 years and served as a Deacon, an Elder, and was active in the Men of the Church, as well as a Sunday School teacher and youth leader.

Jay Clyde Fox married Martha Lee Price Fox in 1949, and they spent 57 years together, until her death in 2006. They were an avid outdoors couple and enjoyed a lifetime of family travels, as well as hunting, fishing, gardening and teaching neighborhood kids how to swim, water ski, and fish.

Mr. Fox was also preceded in death by their only son, William Jay “Bill” Fox; and two sisters, Ella May Fox English and Evelyn Fox Benson.

Those left to celebrate his life and memory include his daughter, Jan Fox Barriger and husband Bill; three grandchildren, Mandy Barriger Weisend and husband Brian, Jessy Barriger, and William Jay Fox II and wife Jennifer; and two great-granddaughters, Remi Weisend and Lucie Fox, all of Taylorsville. Also included are close friends, Guy and Linda Barriger, along with numerous nephews and nieces. Just recently added to his world were, Cherri, Shante, and Derrick as faithful companions and caregivers.

A service to celebrate his life will be held on Tuesday, July 25, 2017, at 10:00 a.m., at Taylorsville Presbyterian Church, with Pastor Paul Sink officiating. The family will receive friends after the service. Following the receiving, a military honor guard graveside service will be held at the Taylorsville City Cemetery.

In lieu of flowers, memorials may be given to the Fellowship Hall Fund for the Taylorsville Presbyterian Church, PO Box 507, Taylorsville, NC 28681; or Catawba Regional Hospice, 3975 Robinson Rd, Newton, NC 28658.