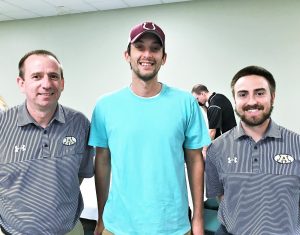 TIP OFF LUNCHEON – ACHS Head Coach Ed Wills, left, is pictured with Owen Coach Clint McElrath, center, and ACHS Assistant Cam Gant during a Coaches vs. Cancer luncheon held during the North Carolina Coaches Association Clinic in Greensboro last month. The Cougars will play Owen as part of the 207 Coaches vs. Cancer Shootout on December 25 in Asheville.

This coming fall, the Alexander Central Men’s Basketball Team will be participating in a very special event when the Cougars play in the 2017 Coaches vs. Cancer Shootout in Asheville on Thanksgiving weekend.

The event, which is sponsored by NC Basketball Coaches Association, the National Association of Basketball Coaches, the American Cancer Society, and Krispy Kreme is held each year to raise funds for cancer research. The games are played at the University of North Carolina Asheville. This year’s contests will be played on Saturday, November 25.
A total of eight games are scheduled on the day, beginning at 9 am. The Cougars are slated to play Owen High School in the eighth and final game of the day at 8 pm.
The event features three women’s games and five men’s contests.
“It is a huge honor for our program to be invited to play in the Coaches vs. Cancer Shootout. We are excited about opportunity to play at UNC-Asheville against a program with a great tradition like Owen. I think it is going to be a great experience for our kids to be a part of this process. We will be raising money to donate to Coaches vs. Cancer in honor of a local hero and be part of a very special banquet to honor each school’s hero,” ACHS Coach Ed Wills commented. “I expect this to be a very emotional experience for our kids as they learn some important life lessons. I hope that people in our community will consider donating to this cause as we work to help in the fight against cancer.”
As part of the Coaches vs. Cancer event, ACHS and other participating schools will be raising funds to support the fight against cancer. Several fundraising events are currently in the works between now and November. 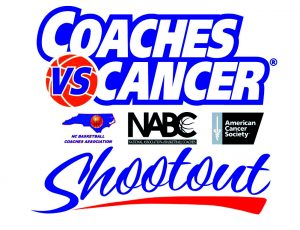 The Coaches vs. Cancer program is a nationwide collaboration between the American Cancer Society and the National Association of Basketball Coaches. This initiative leverages the personal experiences, community leadership, and professional excellence of coaches nationwide to increase cancer awareness and promote healthy living through year-round awareness efforts, fundraising activities, and advocacy programs. Since 1993, coaches have raised over $100 million for the American Cancer Society.
Cancer has touched many in the coaching ranks. The Coaches vs. Cancer program provides coaches with an opportunity to do something about the disease. Through integrated fundraising activities and public awareness campaigns, the coaches are raising the American Cancer Society’s community and national presence, and helping them save lives and celebrate life every single day.
Anyone interested in making a donation can contact Coach Ed Wills at ACHS at (828)632-7063 or by email at ewills@alexander.k12.nc.us.
Posted in Breaking News, Sports