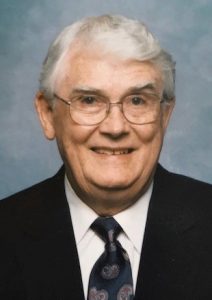 He was born on June 10, 1930, in Alexander County, son of the late Richard White and Alice Barnes White.

He was also preceded in death by his wife of 64 years, Lottie Deal White; brothers, Oren and Richard White; and his sister, Wilma Enis.

Mr. White grew up on a farm in Alexander County and later served in the United States Army during the Korean War. He was a Christian and member of the World Wide Church of God.

His happiest moments were when he was with his family for holidays and birthdays. Music was a huge part of his life. He enjoyed classic country music and he played his guitar every day. He loved to bird hunt with his dogs and, in his early work career, he was known to have pressed 80 pairs of pants in an hour just so he could leave early to bird hunt.

A celebration of Mr. White’s life will be held in the Chapel of Evans Funeral Service on Wednesday, August 16, 2017, at 1:30 p.m., with Pastor Mark White officiating. Interment will be at Blue Ridge Memorial Park with Military Honors provided by the United States Army and the Caldwell County Veterans Honor Guard. The family will receive friends from 12:00 until 1:30 p.m., prior to the service.

In lieu of flowers, memorials may be sent to Caldwell Hospice, 902 Kirkwood Street, Lenoir, NC 28645.

Online condolences can be sent to the family at www.evansfuneralservice.com.

Evans Funeral Service and Crematory of Lenoir is serving the White Family.