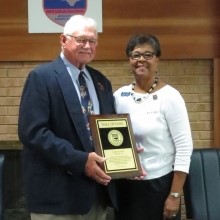 – The North Carolina High School Athletic Association is pleased to announce the new eight-member Hall of Fame Class of 2017. The group of eight was publically presented and introduced at a live-streaming press conference at the NCHSAA Headquarters in Chapel Hill a few minutes ago.

“We are so excited to recognize these eight individuals who have made a tremendous impact, not only on their students and communities, but on the landscape of education-based athletics in North Carolina,” said NCHSAA Commissioner Que Tucker. “This class represents many different areas of service over a vast number of years and the members are to be commended for their outstanding careers and involvement in the NCHSAA.”

The NCHSAA Hall of Fame was officially launched in 1987 when the Association inducted the original three-person class of Bob Jamieson, Leon Brogden and Dave Harris. This year’s eight-member class will bring the total number of inductees to 188 when the group is officially inducted at the annual NCHSAA Hall of Fame Banquet scheduled for Saturday, April 14th at the Embassy Suites in Cary. Ticket information will be available at a later date.

Jim Biggerstaff served as the Head Football Coach at South Point High School from 1969 to 1995. During his time with the Red Raiders, Biggerstaff’s teams won two State Championships, one in 1971 in the WNCHSAA (Western North Carolina High School Activities Association) when they tied Salisbury 14-14, and the other in 1979 in the NCHSAA when they defeated Ahoskie 34-13. His teams compiled a record of 143-74-7 during his tenure and he was named Coach of the Year by the NC Association of Sports Broadcasters in 1971. He was a Head Coach in the 1973 East/West All-Star game and the Head Coach for North Carolina’s team in the 1975 Shrine Bowl.

Allen Brown has spent over 40 years coaching football, most of that time at Thomasville High School where he led the Bulldogs to seven NCHSAA State Championships. Coach Brown’s teams piled up 331 wins against just 100 losses and 2 ties with him as the Head Coach. He was named one of the NCHSAA’s “100 Coaches to Remember” during the NCHSAA’s Centennial Celebration in 2013. Incredibly, his 1995 Thomasville Bulldogs was the first to achieve a 16-0 mark in the history of High School Football in the state of North Carolina.

Dave Elder taught and coached for over 35 years in five different high schools in the NCHSAA, most prominently at Hickory High School. While at Hickory High, Coach Elder was a football and women’s basketball coach, compiling a record of 418-129 in Women’s Basketball during his Hickory tenure. Those women’s hoops teams won three NCHSAA State Championships. Elder’s football career spanned five schools as a head coach with a record of 143-71-1. Elder’s Hickory team won the NCHSAA 3A Football State Championship in 1996, defeating Ragsdale 42-0.

Bob McRae is a highly-awarded former Superintendent in a few school systems within North Carolina, most notably in Cleveland County Schools where he made great contributions to the NCHSAA. McRae was integral in the development of the NCHSAA’s Scholar Athlete program and served 10 years on the NCHSAA Board of Directors during his time. One of the most notable services McRae has provided to the NCHSAA is his time as chairman of the Realignment Committee, a capacity in which he served on three separate occasions. He was named the Region 6 Superintendent of the Year in 1988 and the NCHSAA’s State Award for Superintendent of the Year, presented each year at the Annual Meeting, is named in his honor.

Herb Sampsel was one of the pioneers of women’s athletics in the western part of North Carolina. Sampsel served 34 years as the Head Women’s Basketball Coach at Statesville High School, posting a record of 580-102 during his tenure which ended during the early 1980’s. His teams at Statesville won 22 Regular Season Regional Championships and 13 Regional Tournament titles. He also coached the Varsity Baseball team for over 20 years. The gymnasium at Statesville High is named in his honor, as is the school’s Senior Female Athletic Award. Coach Sampsel is being inducted in the NCHSAA Hall of Fame posthumously, and will be represented by two of his sons in the presentation.

Donnie Simpson coached at both Camden County and Currituck County High Schools during his more than 40-year career in education-based athletics. He was Teacher of the Year in Camden County on two occasions and won the same award once in Currituck County. In 1993, Simpson was named the NCHSAA’s Region 1 Coach of the Year. That same year he served as a coach in the annual Shriners East/West All-Star Game. He is a founding member of the NC Football Coaches Association and has served on the North Carolina Coaches Association Board of Directors.

Dave Thomas served high schools and student-athletes over the span of a 40-plus-year career in education-based athletics, much of that time in Wayne County. Coach Thomas spent time as a teacher, a coach as well as an athletic director for 24 years before serving as the Wayne County System Athletic Director for 18 years. He was the winner of the NIAAA Distinguished Service Award in 2001 and has been inducted into the North Carolina Athletic Directors Association Hall of Fame. A former student-athlete at East Carolina himself, Thomas has been inducted in East Carolina University’s Hall of Fame as well as the Hall of Fame at C.B. Aycock High School.

Earl Vaughan, Jr. grew up in Fayetteville prior to attending UNC-Wilmington. Upon graduation from UNCW, Vaughan took a job at his hometown newspaper,The Fayetteville Observer, where he became the authority on prep sports in the Cumberland County and surrounding area. Vaughan served at the Observerfor 44 years, during which time he was the Chairman of the NCHSAA’s Athlete of the Year Committee for over 30 years. He has twice been named a Distinguished Service Award Winner by the NCHSAA, once in 1995 and again in 2008. He was the first-ever two-time winner of the NCHSAA’s Tim Stevens Media Representative of the Year Award. Vaughan has already been inducted as a member of the Fayetteville Sports Club Hall of Fame.