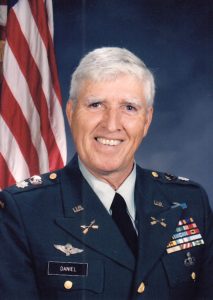 He was preceded in death by his sister, Joyce Anderson; brother, Bobby Daniel; daughter, Patricia Daniel; and granddaughter, Robin Daniel.

LTC Daniel had a rich career as an officer in the U.S. Army and as a JROTC Senior Army Instructor. He began his military career in 1952, enlisting in the U.S. Army. After seven and a half years of service in Korea, Fort Knox, and Fort Campbell, he completed Jump School at Fort Campbell as a member of the 508th Airborne Regimental Combat Team.

He re-enlisted in January 1956, for six years, and was assigned to the 325th Parachute Infantry regiment at Fort Bragg. He volunteered for Rigger School and, after completion in that year, was assigned to the 623rd Air Equipment Repair and Depot Company at Bragg.

His next assignment, in 1958, was to the World Famous 549th Air Delivery Company at Camp Crawford, Japan, where he performed duties in the pack platoon. While on that tour, he participated in a classified mission in the Taiwan Straits.

He was selected to attend Infantry Officer Candidate School (OCS) at Fort Benning and was commissioned a Lieutenant on 12 April 1960, ending another seven and a half years of service in ranks.

He served his country with duty assignments in Korea, Japan, Panama, China, Laos, and three Vietnam tours. After retiring from the U.S. Army, he trained foreign military personnel in North Africa.

His decorations and awards included The Combat Infantry Badge, Legion of Merit, Bronze Star with oak leaf cluster, Meritorious Service Medal, the Air Medal with one oak leaf cluster, the Joint Service Commendation Medal, the Army Commendation Medal, and the Good Conduct Medal. He was a Master parachutist and was awarded jump wings from Vietnam, Thailand, and El Salvador.

Returning to the States, LTC Daniel taught JROTC in Arkansas; and in 1984, he activated the JROTC program at West Iredell High School, in Statesville, where he served for twenty years as the Senior Army Instructor. LTC Daniel is also a member of the Stony Point Masonic Lodge No. 593.

LTC Daniel had no greater pride than his service to God and country, and cherished his love of family and his fellowman.

In retirement, he enjoyed farming, fishing, traveling, and sharing his military stories. His life was filled with examples of charity to those he worked with and to those he did not know.

The family will receive friends on Saturday, September 2, 2017, from 4:00 p.m. – 6:00 p.m., at Alexander Funeral Service. A celebration of his life will be held Sunday, September 3, 2017, at 4:00 p.m., at First United Methodist Church, in Taylorsville, with interment to follow at the Hiddenite Cemetery. Military rites will be provided by the DAV Chpt. 84 of Taylorsville and Chpt. 6 of Hudson, along with the Army National Guard.

In lieu of flowers, memorials may be given to Hospice of Iredell County at 2347 Simonton Rd, Statesville, NC 28625.