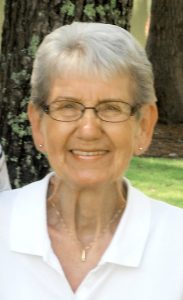 She was born on April 23, 1942, in Clark County, Wisconsin, to the late Uno and Helga Bakke of Withee, Wisconsin. Carol and Ron owned Audubon Hardware and loved their occupation. Carol dearly cherished her marriage of 52 years to Ronald E. Krogman.

In addition to her parents, she was preceded in death by her brothers, George and Jim Bakke; and her sister, Joyce Johnson.

Those left to cherish her memory include her husband, Ron Krogman; son, Scott Krogman of Richmond, Virginia; daughter, Traci Smith of Bethlehem; sister, Judy Vollrath of Colby, Wisconsin; grandchildren, Preston and Savannah Smith of Bethlehem; numerous nieces and nephews; along with special family friends, Joe and Dawn Kessler, who are like family.

Formal funeral arrangements have not been made, but inurnment will be with the family.