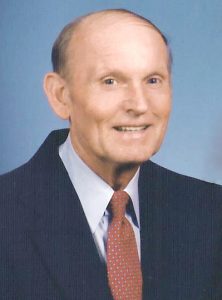 Mr. Echerd was born May 19, 1934, in Alexander County, the son of the late Dallas Echerd and Ida Burgess Echerd.

He was a US Army Veteran, who had served in the Korean Conflict, and was of the Lutheran faith.

Lynn was the owner and operator, along with his wife, of Country Carpet Flooring Center for 28 years. He loved to mow his lawn and loved to travel, having traveled to all 50 states and abroad.

Including his parents, he was preceded in death by three brothers, William Echerd, Howard Echerd, and Bruce Echerd, all of Taylorsville; and two sisters, Thelma McLean of Taylorsville, and Linda Douglas of Lincoln, Nebraska.

The funeral service will be held at 3 p.m., Friday, September 1, 2017, at Mt. Pisgah Lutheran Church. Pastor Mike Stone will officiate. Burial will follow in the St. Luke Lutheran Cemetery. The family will receive friends from 6-8 p.m., Thursday, August 31, 2017 at Adams Funeral Home.

Memorials may be made to: Alexander County Rescue Squad, PO Box 938, Taylorsville, NC 28681.

Adams Funeral Home and Cremation Services is honored to be serving the Echerd Family.