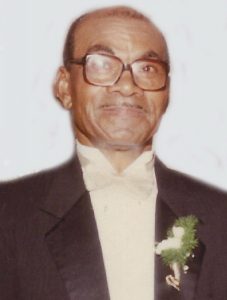 Robert Lyss Newland, Sr., 97, of 4th Street NE, Taylorsville, went home to be with his Lord and Savior on Sunday, September 3, 2017 at Catawba Valley Medical Center.

Mr. Newland was born June 5, 1920, in Alexander County, the son of the late Walter Newland and Onie Jones Newland.

He was a US Army veteran, who had served in WWII, and was a member of New Zion Baptist Church, where he served as a deacon for many years. Also, he served as Superintendant of the Sunday School Department and as a Sunday school teacher.

Robert had worked as manager of the receiving at the Trio Grocery Store and was self-employed as a scrap man for many years.

The home-going service will be held at 1 p.m., Saturday, September 9, 2017 at New Zion Baptist Church. Rev. Frank Butler, Jr. and Rev. Ricky Hayes will officiate. Burial will follow in the Macedonia Baptist Church Cemetery (New Zion part), with full military honors accorded by DAV Chapter 84 of Taylorsville. The family will receive friends one hour prior to the service.

Adams Funeral Home and Cremation Services is honored to be serving the Newland Family.