productive scorers in North Carolina history. She was a four-year starter from 1956-1959 at Taylorsville High. She started every game 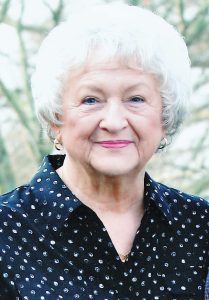 of her high school basketball career, earning All-Conference honors in 1957, 1958, and 1959. In addition to All-Conference honors, she was voted All-State in 1959 and was selected to play in the East/West All-Star Game. She set a record for points scored in the East/West game with a 44-point effort.
When her high school career finished, Reba was listed as ninth overall on the North Carolina High School scoring list with 2,888 points from 1956-1959. She is one of three former Taylorsville players on the scoring list behind Kay Wilson (4,210 points) and Angell Pennell (3,156). With Reba’s selection this year, all three Lady Bears stars are members of the Alexander County Sports Hall of Fame.
Rebia and her husband, Roy, currently reside in the Wittenburg Community. They have four children and six grandchildren.
CAREER HIGHLIGHTS
• All-State Women’s  Basketball, 1959;
• Scored 44 points in East/West Game;
• 2,988 career points (1956-1959);
• Three time All-Conference Selection;
• Started every game of her four-year high school career.
LAURA THOMAS LAWS
A 1977 graduate of Alexander Central High School, Laura Thomas Laws was a standout athlete in softball, basketball, and golf during her high school career in Taylorsville.
Laws was an All-Conference player in softball and earned East/West All-Star honors in women’s basketball, but golf was the sport where she excelled most. She was presented the prestigious Bobby Gryder Memorial Award in the spring of 1977.
Following graduation from ACHS, she accepted a golf scholarship to Wake Forest University where she was a member of the 1980 NC Association for Intercollegiate Athletics for Women Championship team. Wake Forest also captured the Duke Invitational Team event in 1980. In 1981, she was voted the Most Improved Golfer at Wake Forest and later graduated Cum Laude. 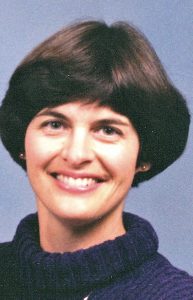 After college, she was a member of Brushy Mountain Golf Club in Taylorsville and the Statesville Country Club. She won the BMGC Course Championship in 1980 and set a course record for scoring. Laws captured the Statesville Country Club Championship a whopping 14 times.
She was named the Statesville-Iredell Schools Volunteer of the Year Award winner three times and also earned the Statesville Junior Service League Volunteer of the Year Award.
In 2003, Laws passed away unexpectedly at the age of 43. Following her death, close friends of the Fourth Creek Rotary Club started a memorial golf tournament in her name. The tournament is played in Statesville and averages around $40,000 profit each year for scholarships. In addition, Wake Forest University presents a yearly scholarship in her memory.
Her husband Edwin Laws resides in Statesville. The couple has two children, Lindsay Laws Deviney and Andy Laws.
CAREER HIGHLIGHTS
• Voted Alexander Central Most Outstanding Senior Athlete, 1977;
• 1977 Bobby Gryder Memorial Award recipient:
• Most Improved Golfer  ,  Wake Forest University, 1981;
• Brushy Mountain Golf Club Champ & Course Record, 1980;
• 14 time Club Champion – Statesville Country Club.
JIM “EASY” POOLE
Often recognized as Alexander County’s First Major League Baseball Player, Jim “Easy” Poole enjoyed a professional baseball career as a player which spanned 32 total seasons.
A native of Alexander County, Poole began his professional baseball career at the age of 19, in 1914, with his minor league debut. He played professional baseball, either in the Minors or Majors, until retiring as a player at the age of 51, in 1946. Following his playing days, Poole went on to serve as a Minor League Baseball Manager until 1961.
During his career, Poole played three seasons with the Philadelphia Athletics of the MLB’s American League. Poole was a member of the Athletics Organization from 1925 until 1927. In his major league career, he appeared in 283 total games. His best season came in 1925 when Poole hit .298 in 133 games.

He appeared in just 38 games in 1927 before breaking his leg and missing the remainder of the season. In 1927, Poole had the opportunity to play with several legends and Major League Hall of Famers. Poole was a teammate of Ty Cobb, Jimmie Foxx, and Lefty Grove on the 1927 Philadelphia club.
Poole played in a total of 2,637 professional games (Minors & Majors), compiling a career batting mark of .316 with 311 career home runs. He played for more than 30 teams in his Minor League career and blasted a whopping 50 homers as a member of the Nashville Volunteers in 1930. That season he drove in 167 runs. In all, Poole collected 3,150 hits as a professional player, including 662 doubles. He also tallied 240 stolen bases.
He served as a scout for the Athletics organization and later managed in the Minor Leagues. He even managed two of his sons, Jim Poole, Jr., and Phil Poole, in 1941.
Jim Poole played his final Major League game on August 22, 1927. Born in Taylorsville on May 12, 1895, Poole died January 2, 1975 in Hickory.
CAREER HIGHLIGHTS
• Played in 2,637 Professional Baseball Games;
• Member of the Philadelphia Athletics from 1925-1927;
• Hit 311 home runs as a professional baseball player;
• Played with Major League Hall of Famers Ty Cobb & Jimmie Foxx in 1927;
• Managed his sons Jim, Jr. and Phil Poole in 1941.
ALEXANDER  “AY” YODER
A 1993 graduate of Alexander Central High School, Alexander “AY” Yoder was a three-sport high school star for the Cougars from 1990-1993.
His success on the baseball diamond earned Yoder a scholarship to the University of North Carolina Chapel Hill after graduating from Alexander Central.
While at ACHS, Yoder shined as a member of the Cougar Football, Basketball, and Baseball Teams. He earned All-Conference in baseball following his sophomore, junior, and senior seasons. He was voted the NW Conference Baseball Player of the Year in 1993 and led the Cougars to the State Championship Series against Wilmington New Hanover. He posted a 12-2 mound record and 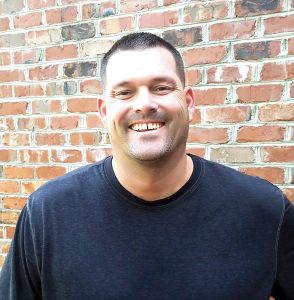 clubbed eight home runs for Coach Harold Odom during his senior season and earned All-State honors. He was invited to participate in the US Olympic Festival in San Antonio, Texas,  in 1993 and earned honorable mention  All-American votes in the USA Today.
Yoder also earned All-Conference honors in football and basketball at Alexander Central. In 1992, he led the Cougars to the state playoffs as an All-NWC performer at quarterback. In basketball, he was the leading rebounder for ACHS also earning a spot on the All-Conference hoops team as a junior and senior.
Following high school, Yoder attended UNC and was a Northeast All-Star in 1995 and 1996. During his junior campaign in Chapel Hill, Yoder led the Tarheels in wins and innings pitched.
Yoder, who now resides in Winston Salem with his wife, Stephanie, and two children, Ava and Jackson, now serves as the Pitching Coach for West Forsyth High School in Clemmons. While at West Forsyth, Yoder has been voted the NC Assistant Coach of the Year and has coached 13 players that have gone on to play college baseball.
CAREER HIGHLIGHTS
• 1993 Graduate of Alexander Central High School, earning All-Conference in Football, Basketball, and Baseball;
• Voted Northwestern Conference Baseball Player of the Year and NC All-State, 1993;
• Invited to US Olympics Festival – San Antonio, Texas, 1993;
• Received Baseball Scholarship to University of North Carolina – Chapel Hill, led team in wins and innings as a junior;
•  Voted NC Assistant Coach of the Year as a member of West Forsyth HS Baseball Staff.
DALE YOUNT
Coach Dale Yount coached in more than 1,000 sporting events during his middle school and high school coaching career. Yount, who now resides in the Bethlehem Community, is  the winningest men’s basketball coach at Alexander Central High School. However, his coaching career included more than just hoops. He coached varsity men’s basketball at ACHS for 23 seasons, from 1972 until 1995. He also served as a football, golf, and baseball coach during his career at Alexander Central. Prior to coming to ACHS, Yount coached at Newton Junior High, Newton High School, Watauga, and Taylorsville High School.
Despite coaching in hundreds of events off the basketball hardwoods, Yount is recognized most for his tenure on the Varsity Cougars basketball bench where he led ACHS to four regular season conference championships and two conference tournament titles. 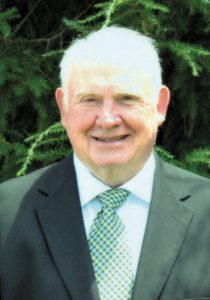 In all, he coached in 550 varsity games at ACHS, compiling a total record of 256-294. In his final season at Alexander in 1994-95, the Cougars posted the school’s first ever 20-win season.
Coach Yount coached in 705 total basketball games from 1964 until 1995. He earned 361 wins and suffered 344 losses in his hoops coaching career.
He was an assistant coach for ACHS Head Football Coach Glenn Wilson for 23 seasons. In 1983, Wilson and Yount coached together on an ACHS staff which led the Cougars to a perfect regular season and a league title. Coach Wilson was inducted into the Alexander Sports Hall of Fame in 2013.
He also spent two seasons as a Varsity Baseball Coach at Alexander Central and one season as Golf Coach.
Yount and his wife, MaryAnn, also a retired coach and educator, live in Bethlehem. They have two children, Lauren and Patrick, and two grandsons, Jacob and Luke.
CAREER HIGHLIGHTS
• Winningest Men’s Basketball Coach in ACHS History;
•  Served as Basketball, Football, Baseball, and Golf Coach at Alexander Central High School;
• Led ACHS to four Northwestern Conference Regular Season Basketball Championships;
• Coached 705 basketball games from 1964 until 1995;
• Led ACHS to school’s first 20-win men’s basketball season in 1994-95, his final season at the school.
SPECIAL TEAM RECOGNITION
For the first time in the six-year history of the Alexander County Sports Hall of Fame, the selection committee is recognizing a team with a “Special Team Recognition” during this year’s November induction ceremony.
The 1942 Stony Point High School Baseball Team captured the North Carolina Class C Championship with a win in Chapel Hill, NC.
The Stony Point title that season is believed to be the lone team state championship in Alexander County high school sports history, other than the nine titles which have been conquered by the ACHS Lady Cougar Softball Program.
The Stony Point squad of 1942 was coached by Charles “Pinkey” Turner, who also served the school as a math instructor and coach of additional teams.
Included on the team was Alexander County Sports Hall of Famer and former Major League World Series winner Dave Jolly and Plaskie McCree, who pitched the Stony team to a victory in the title game with a 4-0 shutout effort against Bethesda High School of the Chapel Hill area.
Only two members of the team are still alive as the 75th anniversary of its feat approaches in May. Dayton Lackey led off for the SP team in the final game and played second base, while Kester Martin started at first base and occupied the sixth spot in the batting order for the championship clash with Bethesda.
In addition to the talents of McCree, Jolly, Lackey, and Martin, the 1942 Stony team included Harley Junior Goble, Phil Lackey, Bill Patterson, Lindsey Stikeleather, Willis Douglas, George Chapman, Keith Rogers, and Paul Sharpe.
ABOUT THE NOMINATION PROCESS
Once a person is nominated, his or her nomination remains permanent and will receive selection consideration each year by the selection committee.
Nomination forms are found on the Education Foundation link on the Alexander County Schools’ webpage (www.alexander.k12.nc.us) and are due by June 1 each year.
Alexander County Sports Hall of Fame Committee members include John Bruce (Chairman), Dennis Smart (Treasurer), Brigette Rhyne (Secretary), Andy Anderson, Alvin Burke, Anna Ferguson, Mike Millsaps, Donny Pennell, Bobby White, and Larry Yoder.
TICKET OUTLETS
Hall of Fame Induction Tickets will be
sold at the following locations locally:
* Alexander County Board of Education
* Brushy Mountain Golf Club
* Office Practice of Pharmacy
* Bethlehem PJ’s Seafood and Steak
* People’s Drug
* Nationwide Insurance, Hiddenite
*Bobby Joe’s
* Statesville Historical Collection
(Tickets will be available in mid-September)
Posted in Breaking News, Sports