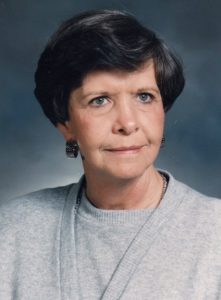 Dr. Josephine Alexander Foster, 86, of Stony Point, passed into the loving arms of her Lord and Savior on Sunday, September 10, 2017, at Iredell Memorial Hospital, in Statesville.

Dr. Foster was born on October 5, 1930, in Iredell County, and was the twin daughter of the late William Thomas Alexander and Vivian Johnson Alexander of Alexander County.

On June 9, 1957, she married Richard Harrison Foster, who preceded her in death. In 1963, Dr. Foster received the first doctorate awarded under her alma mater’s new name of University of North Carolina at Greensboro.

During the course of her esteemed career, Dr. Foster served in the Home Economics and Child Development departments at Columbia College, East Carolina University, Virginia Tech and Appalachian State University. She also performed in an administrative capacity with the Alexander County School system. After her retirement from the State of North Carolina, she served on the Catawba Valley Community College Board of Trustees for ten years. She was also the co-author of a textbook, Creative Living, for four editions.

Dr. Foster was preceded in death by her parents, a brother, Floyd Thomas Alexander, and her twin sister, Geraldine Alexander Cranford.

Left to cherish her memory are her son, Richard Harrison Foster II (Joanie) of Boone; and her daughter, Amanda Foster Call (Farley) of North Wilkesboro. In addition, she is also survived by her beloved grandchildren, Lauren Foster, Ridge Graham, and Abby Foster; as well as two special nieces, Priscilla Crutchfield and Sharon Robbins (Rodney); and special cousins, Patricia Anderson and Micki Earp (Larry).

Funeral services will be conducted at 2:00 p.m., Friday, September 15, 2017 at Stony Point United Methodist Church. Pastor Donnie Durham will officiate. Burial will follow in the church cemetery. The family will visit with friends from 1:00 – 2:00 p.m., prior to the service, in the fellowship hall.

Condolences may be e-mailed to the Foster Family by visiting our website at www.chapmanfuneralhome.com.