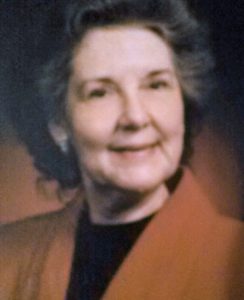 Nancy Marie Gant, 90, of Taylorsville, was called home on Friday, September 15, 2017 to be with her Heavenly Father.

Marie, as she was known to most family and friends, was born on October 13, 1926, daughter of the late Nora Elder and Daniel Wade Deal.

She grew up and graduated from Taylorsville High School in 1943. Soon after, she married her sweetheart and husband of 56 years, Paul Gant. After the war, they moved from North Carolina to Michigan, where they spent 45 years of their married life, before moving back to North Carolina in 1994.

Marie’s life can be summed up as God and family. She loved to read, cook, sew, paint and always put others first. Her favorite book was the Bible and she had several poems published. She has been a member, and active church goer. Her final earthly church home was St. Stephens Lutheran Church, MS, in Hickory.

In addition to dedicating her life to her family, Marie worked for the U.S. Federal Bureau of Investigation in Washington, DC, and Northern Engineering in Detroit, Michigan.

A Celebration Service of her life will be held at 11 a.m., Saturday, September 23, 2017, at St. Stephens Lutheran Church MS, in Hickory. The family will receive friends one hour prior to the service.

The family sincerely thanks Trinity Village West for the care and kindness given to Marie.

Nancy Marie Gant has finished her race and won!! She is truly a child of our Great Lord and Savior Jesus Christ.

Adams Funeral Home and Cremation Services is honored to be serving the Gant Family.