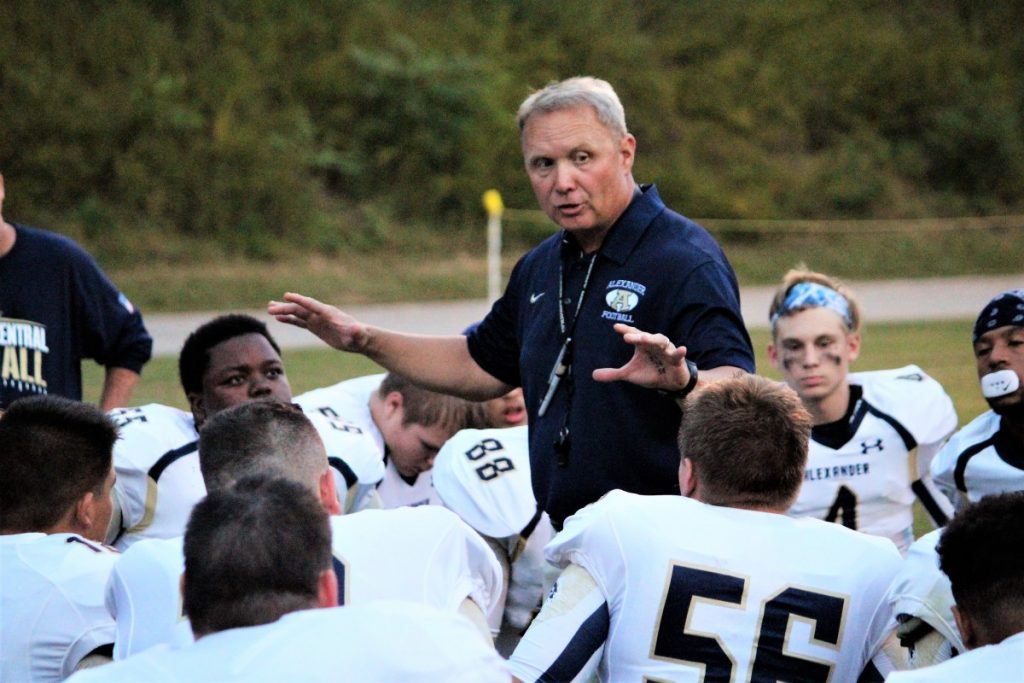 ACHS Coach Butch Carter speaks with his team prior to Friday’s NWC opener at West Caldwell.

Bryson Godfrey (229 yards) and Devon Weiss (171 yards) combined for over 400 rushing yards and six touchdowns as Alexander opened conference play with a win for the first time since 2012.

Alexander piled up 564 yards on the night, with 498 yards coming on the ground. Godfrey, who missed the last two-plus games with an ankle injury, returned to the lineup and ran the ball 17 times for 229 yards and three touchdowns. Weiss, who battled illness all week, also ran 17 times, finishing with 181 yards and three scores. 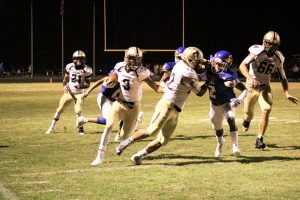 Bryson Godfrey ran for three scores in his return to the lineup.

Tevin Clark and Gunnar Anderson added one rushing TD each, while Anderson completed five of six pass attempts for 75 yards.

Alexander converted five of seven two-point conversion attempts in the game for 10 crucial points. Anderson ran for three of the team’s two-point plays and passed to Lucas Walker for another.

The ACHS win sets up a battle of unbeaten teams next Friday, September 29, when Watauga (5-0) visits Cougar Stadium for a 7:30 pm kickoff.  The Pioneers manhandled South Caldwell 34-0 in their NWC opener Friday night in Boone.

See the Wednesday, September 27 edition of The Taylorsville Times for more game details, coach’s comments, and a preview of next week’s game against Watauga.