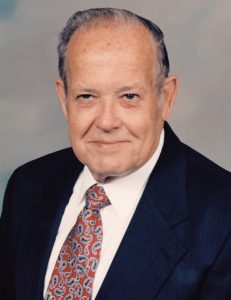 Born September 23, 1929, in Alexander County, he was the son of the late David Jessie Logan and Gertie Isenhour Logan of Taylorsville. David served four years in the United States Air Force during the Korean War.

He was a founding and active member of Lakeview Baptist Church for over 55 years, serving as a deacon and in many other capacities. David took over his father’s business of Logan Ornamental Iron Works, in Taylorsville, and never truly retired. He valued friendship and service to others over business.

David loved motorcycles, car racing, hunting, fishing, and wildlife. He loved fruit more than anyone, delivering it seasonally to family and friends for decades, from the orchards of friends. David also loved music, from classical, opera, to jazz.

In addition to his parents, David was preceded in death by his wife of 64 years, Ethel Jolley Logan; a sister, Ruth Crawley; a brother-in-law, Ray Jolley; and sisters-in-law, Estelle Echerd, Cecil Crouch, and Ellen Elder.

David is survived by his sons, Gordon Logan and Mark Logan and wife Maria; a daughter, Krista Schuck and husband Timothy; grandchildren, Matthew Logan and wife Chastity, Grant and Jackson Logan, and Logan and Joshua Schuck; a sister-in-law, Helga Jolley; and four nieces and seven nephews and their families.

A Celebration of Life will be held at 2:00 p.m. on Saturday, September 30, 2017, at Lakeview Baptist Church, with Pastor Jerry Hurley and Pastor Troy Grant officiating. Burial will follow in Woodlawn Memorial Gardens with military rites. The family will receive friends from 1:00 p.m. – 1:45 p.m., in the church foyer, prior to the service.

Pallbearers to honor Mr. Logan will be his grandsons.

Condolences may be sent to the Logan Family at www.drumfh-hickory.com.

Drum Funeral Home, in Hickory, is honored to be serving the Logan Family.