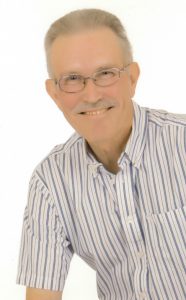 Terry Lee Bowman, 69, of Taylorsville, went to his heavenly home on Sunday, September 24, 2017, after a courageous two year battle with cancer, but in the end won his final victory through his Lord and Savior Jesus Christ.

He was born on November 20, 1947, in Wilkes County, the son of the late Escar Elmore and Eunice Bumgarner Bowman. Terry honorably served our country in the US Army during the Vietnam Era.

He was retired from Bellsouth – ATT after 37 years as an Engineer, where he was a member of the Telephone Pioneers. Terry was a very active member of Bethlehem Baptist Church, where he taught the 1st and 2nd grade Sunday School Class for 35 plus years and was part of the Building Committee.

Through the Alexander County Baptist Association, he served in the Handiman Ministry and was part of the Baptist Men Disaster Relief in the Association.

Terry loved listening to Southern Gospel Music. He was a loving husband, father, grandfather, brother, and friend, and will greatly be missed but forever in our hearts.

Those left to cherish his memory include his wife of 43 years, Revonda Kay Hall Bowman of the home; sons, Jeffrey Scott Schronce of Andrews, South Carolina, and Clint Lee Bowman (Staci Cooke) of Denver; a daughter, Kimberley Schronce Corriher (Robert Eric) of Bethlehem; granddaughters, Shelby Dian Corriher of Bethlehem, and McKenzie Lynn Bowman of Hiddenite; sisters, Joy Bowman Brown (Ronnie C.) of Taylorsville, and Jill Bowman Fox (Bud) of Hiddenite; along with a number of nieces and nephews.

The family will receive friends on Tuesday, September 26, 2017, from 1:30 p.m. – 3:30 p.m., at Bethlehem Baptist Church, and the service will follow, at 3:30 p.m., with Dr. Wayne Caviness officiating. Burial will follow in the church cemetery. Military rites will be provided by the DAV Chapter 84, of Taylorsville, and Chapter 6, of Husdon.