HUNTERS AND THEIR MENTORS GATHER — The Hands of a Sportsman event in the Drumstand Community on Sept. 9 presented several disabled hunters with the opportunity to deer hunt. The hunters and their mentors are shown above.

There were hugs, whoops, high fives, and even some tears of joy among male and female hunters during the local Hands of a Sportsman deer hunt for youth and disabled hunters this month.

Seventeen disabled hunters from the area, ranging in age from 11 to 72 years, plus family members and local hunters who served as mentor/guides, took part in the September 9 hunt headquartered at the Drumstand Community Building in Stony Point.

The big event included a fish fry for lunch, and a supper, too. 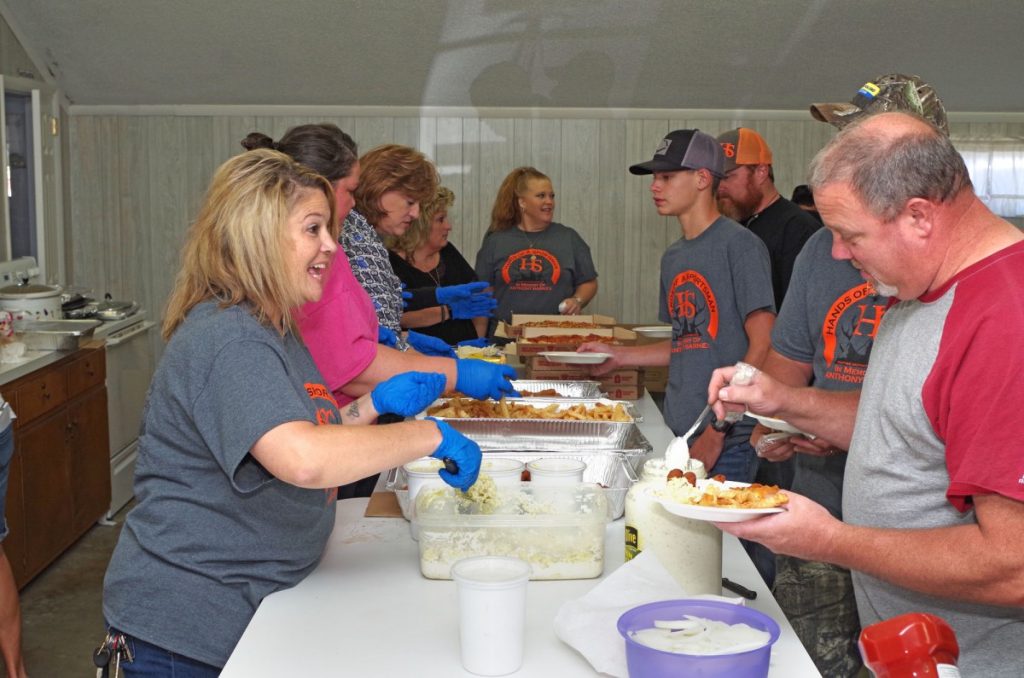 Fried crappie, BBQ, and other tasty treats were waiting for the sportsmen when they returned to Drumstand Community Building from the morning hunts.

“There are so many people to thank for their support and help. Big thank you to the Rocky Mountain Elk Foundation for sponsoring this hunt, the cooks stood over boiling oil and hot cookers and fed over 250 folks at lunch and 200 for supper, all the ladies chipped in and made desserts, served food, and sold 50/50 tickets,” Hinceman noted.

The hunters harvested a total of 10 deer on September 9.

Local businesses donated to created the first Hands of a Sportsman shirt, in memory of Anthony Barnes.

Barnes, who died this year at age 21, was a fan of the outdoors but suffered from spina bifida. Hinceman and a crew were able to film a hunt with Barnes before the young man passed away Feb. 13, 2017, due to complications from hernia surgery.

A video of a hunt with Anthony Barnes is available on the Passin’ It On Outdoors website and at: vimeo.com/231271059.

At the Drumstand event, Rev. Gary Jennings presented Anthony’s mother, Teresa Barnes, with a special plaque and quilt in memory of Anthony. 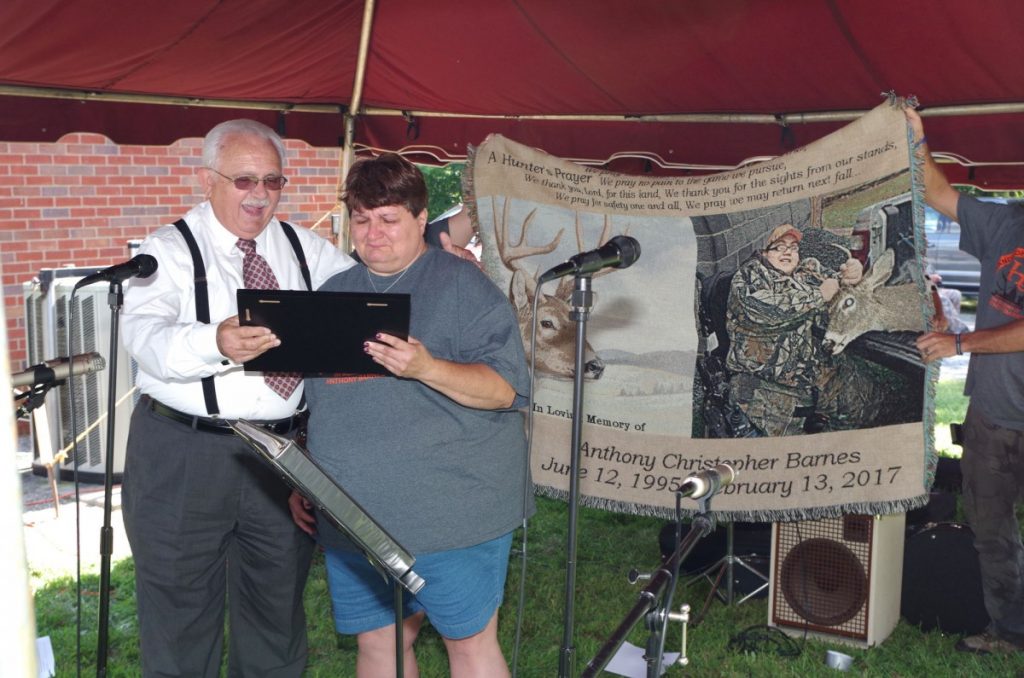 IN MEMORY — At the Drumstand event, Rev. Gary Jennings (above left) and others presented Anthony’s mother, Teresa Barnes, with a special plaque and quilt in memory of Anthony. The young man loved hunting and the outdoors but suffered from spina bifida.

Hinceman also acknowledged the help of local resident Guy Mundy “for having such a big heart and his hard work organizing this hunt, the guides, and hunters.”

Hinceman, Owner/Host of Pass’n it on Outdoors, a hunting and outdoor TV show which has aired since 2009. The series filmed a hunt the next year, at the Wheelin’ Sportsmen hunting event, and went on to film each year with a special disabled hunter, to help show that anyone can hunt.

Always interested in the outdoors since his youth, Hinceman has a passion to bring others into the outdoors to experience nature, especially youths.

“It’s funny how small events, that can seem so insignificant throughout childhood, can later play important roles in your development as an adult,” Hinceman related.

This led Hinceman to found the Hands of a Sportsman non-profit group in April 2016, which is based in Salisbury, NC. Its motto is: Inspire. Motivate. Overcome. 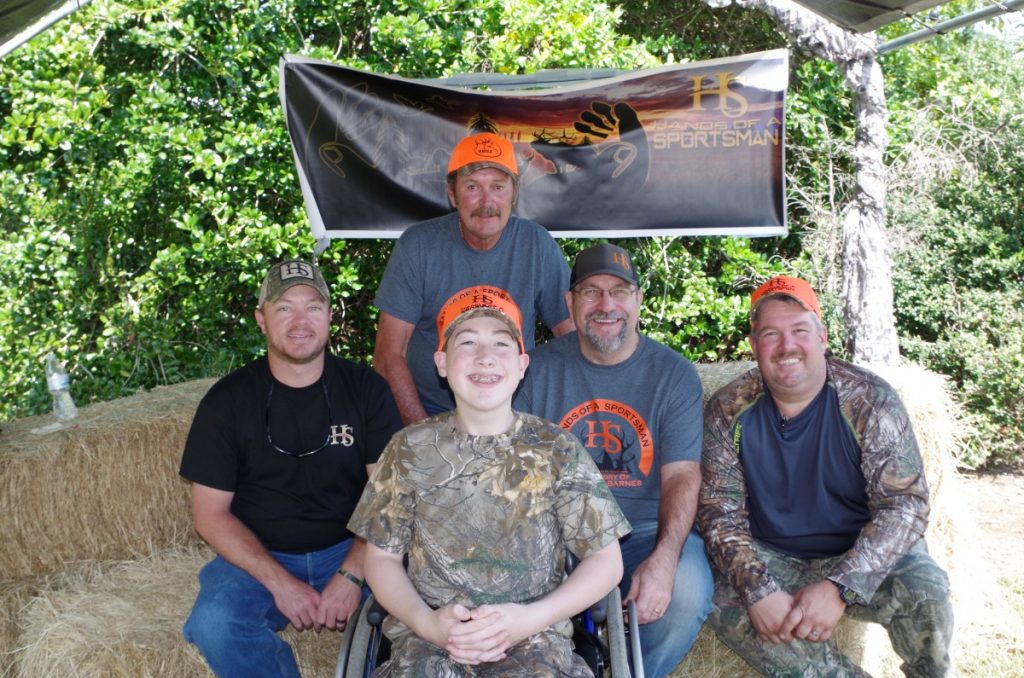 ALL SMILES AFTER SUCCESSFUL HUNT — Young Joel Shytle, age 12, was among the disabled hunters who were able to shoot a deer at the Hands of a Sportsman event Sept. 9 in Alexander County. Shown above, left to right: seated – Brad Ross, of Passin’ It On Outdoors; Joel Shytle, hunter; David Hincemen, founder of Hands of a Sportsman; and Ryan Shytle, Joel’s father; standing – hunting mentor Larry Price, of Stony Point.

The Drumstand hunt was one of several events this year. The NC Wildlife Commission granted special permission for Hands of a Sportman hunters to use rifles to take deer during the first day of bow season on September 9. 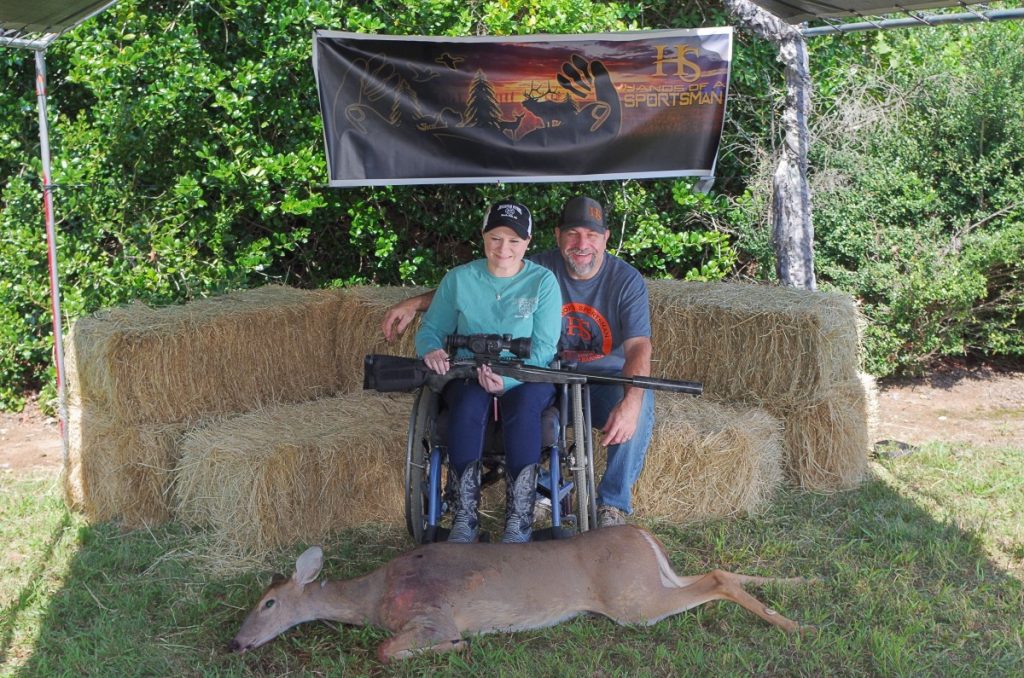 FIRST DEER — Above, Jessica Starnes, 31, is shown with Hands Of A Sportsman founder David Hinceman. Starnes was able to take her very first deer at the HOAS hunt on September 9, 2017.

On September 23, HOAS held its Second Annual Youth Deer Hunt in conjunction with the Land Trust for NC based in Mocksville.

Coming up, Hands of a Sportsman will hold the Dreaming Big Disabled Hunt in Randleman, NC, Nov. 24-25. And the Wheelin’ Sportsmen Hunt returns Dec. 1-2 in Stanly County, hosted by Sawtooth Oak Farm and held at Gold Hill, NC.

Anyone interested in helping Hands of a Sportsman can volunteer or donate funds. Find out how at the website, http://www.handsofasportsman.org.