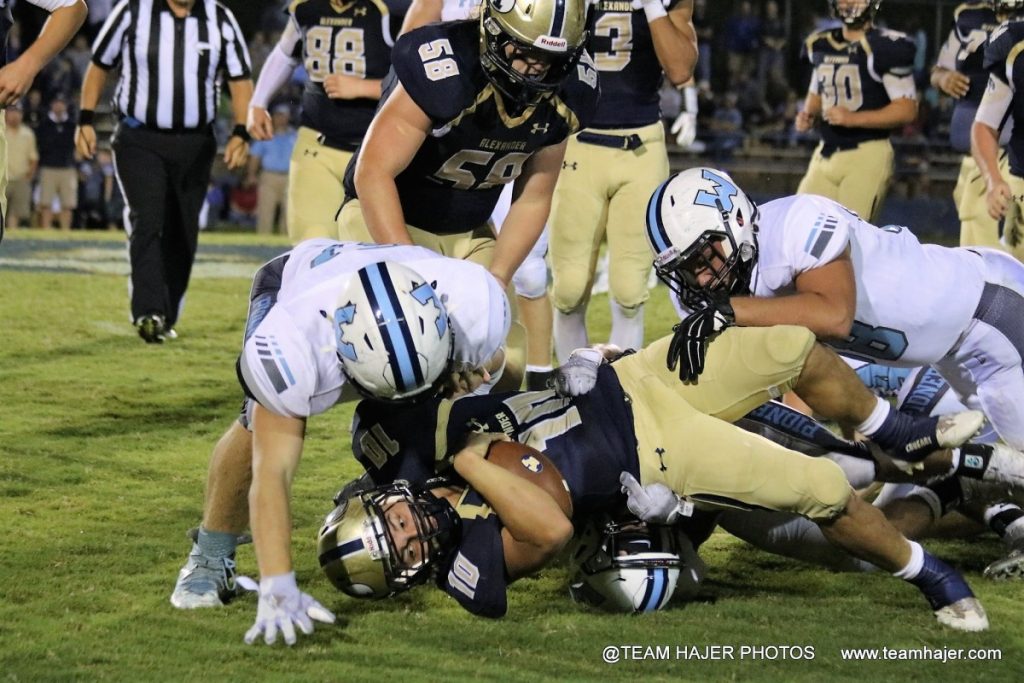 Devon Weiss keeps his legs churning as he picks up extra yards vs. Watauga.

Just before launching a game-winning 46-yard touchdown pass to Kendall Flowers with just over a minute to play, Alexander Central senior quarterback Gunnar Anderson told anyone who would listen on the Cougar sidelines to “Never Stop Believing,”.

Anderson, who said he dreamt about the game-winning hookup with Flowers the night before, must have continued to believe himself as he calmly led ACHS down the field in the final stages of last Friday’s Northwestern Conference game against Watauga in Taylorsville. 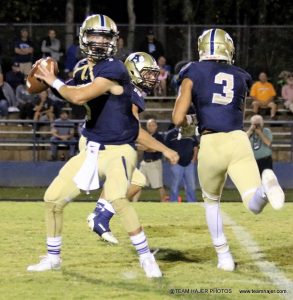 Gunnar Anderson completed 11 of 13 passes for 171 yards and two scores in Friday’s win.

After Watauga took its first lead of the game at 33-32 with just over two minutes to play, Anderson guided Alexander on a four-play, 65-yard scoring drive in just over a minute and capped the march with the 46-yard strike to a streaking Flowers into the north end zone of Cougar Stadium. The score put Alexander in front for good at 38-33 and allowed the Cougars to remain unbeaten on the season at 6-0.

The win also sets up another huge game in the NWC on Friday, October 6, when the Cougars travel to Morganton to face Freedom. The Patriots held on for a 35-30 win over Hickory on Friday night. Both ACHS and Freedom enter next week’s game with 2-0 league marks and first-place in the NWC on the line.

The loss was the first of the season for Watauga, which slipped to 5-1 and 1-1 in league play.

ACHS led for almost the entire contest until Watauga took its only lead of the game late in the fourth. The Pioneers rallied from a 32-19 hole in the fourth and grabbed their first advantage when Bryce Satterfield, son of ASU Head Coach Scott Satterfield, scored on a short run with 2:37 to play in the fourth period. Satterfield’s run tied the score at 32-32 and the Pioneer PAT gave the visitors from Boone a 33-32 lead.

The ensuing Watauga kickoff sailed out of bounds allowing the Cougars to take possession at their own 35-yard line. Four plays later, Anderson lofted a deep pass down the sideline to Flowers who had slipped behind the Pioneer secondary. The senior gathered in the Anderson offering and jetted to paydirt. Alexander’s two-point effort failed and the Cougars led 38-33 with just over a minute to play.

From there, ACHS ousted  any hopes of a Watauga rally and when AJ Miller swatted away a deep fourth down pass on Watauga’s final play, Alexander’s victory was sealed. 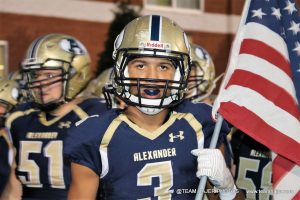 Bryson Godfrey became the third player in ACHS history to surpass 3,000 rushing yards in his career on Friday night.

The Cougars controlled the game most of the night, dominating the offensive statistics and time of possession.

A scoring pass from Anderson to Curtis Evans on the game’s first series put the home team in front 6-0 early.

After tied the score at 6-6 later in the first period, Alexander got back-to-back scoring runs by Steven Montgomery (six yards) and Bryson Godfrey (38 yards) to take a 20-6 lead midway through the second stanza.

The Pioneers would not relent and answered with a touchdown of their own with just under two minutes to play in the first half. An Anderson Castle TD pass pulled the visitors to within one score at 20-13 with 1:41 to play before the half.

Defensive breakdowns by both teams resulted in two more scores in the final minute of the first half. After Devon Weiss’ 29-yard run with 48 seconds to play in the quarter gave Alexander a 26-13 lead, Watauga answered with a 27-yard scoring jaunt from Jaiden Bond third seconds later. The Bond score made the score 26-19 at the half. 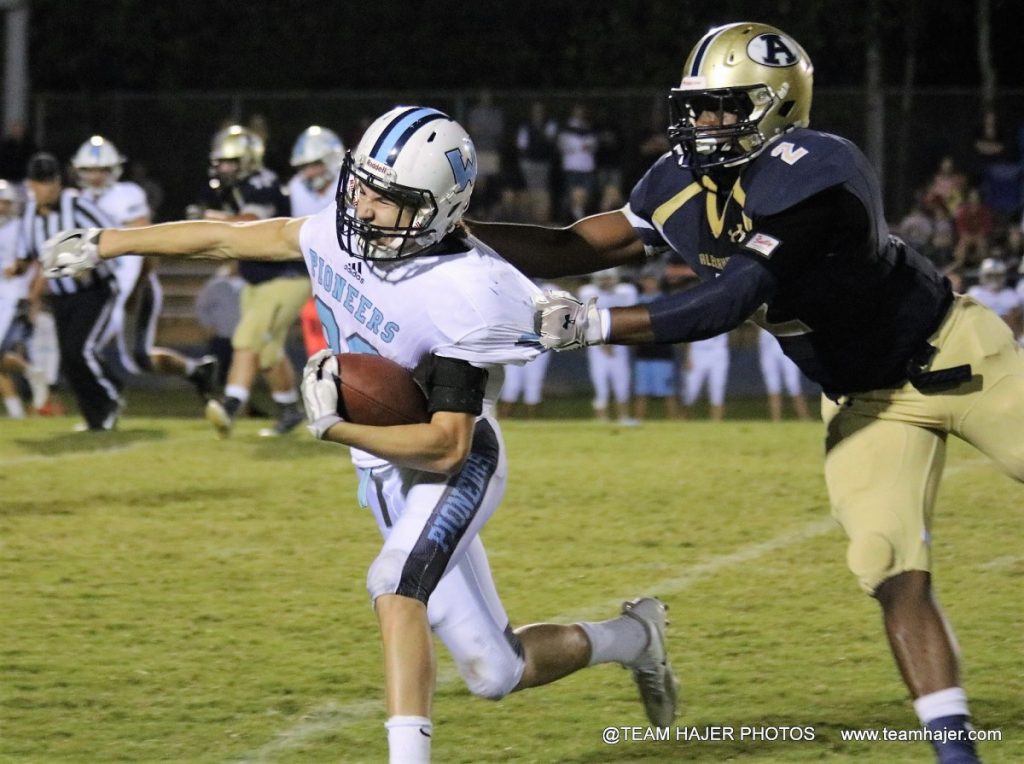 Lyndon Strickland brings down Watauga’s Bryce Satterfield for a key stop on defense.

The lone score of the third period put Alexander in front 32-19 when Anderson called his own number and scored on a three-yard keeper play.

From there, Castle and Satterfield scored on runs of 20 and four yards respectively, to give Watauga its short lived lead and set up Alexander’s late game heroics.

On the night, Anderson enjoyed an efficient night under center, connecting on 11 of 13 pass attempts for 171 yards and two scores.

Devon Weiss led the team’s running attack with 128 yards and a score, while Anderson ran for 68 yards. Godfrey ran for 58 yards on the night with a score and became the third player in ACHS to surpass 3,000 rushing yards in a career.

Godfrey added five catches for 83 yards, while Flowers had four grabs for 80 yards and the game-winner.

Alexander’s defense delivered a huge stop on Watauga’s final possession to preserve the win. All night, the Cougar defense was sparked by the play of outside linebacker Lyndon Strickland, who turned in his most productive performance as a Cougar. Strickland led Alexander with 10 total tackles, including several key stops down the stretch of the game. Another junior linebacker, Jordan Brown, added nine total tackles and two tackles for loss.

The “Never Stop Believing”  Cougars now turn all their attention to the key showdown in Morganton next week as the teamâ€™s return to the NW 3A/4A Conference rolls on in its first season. 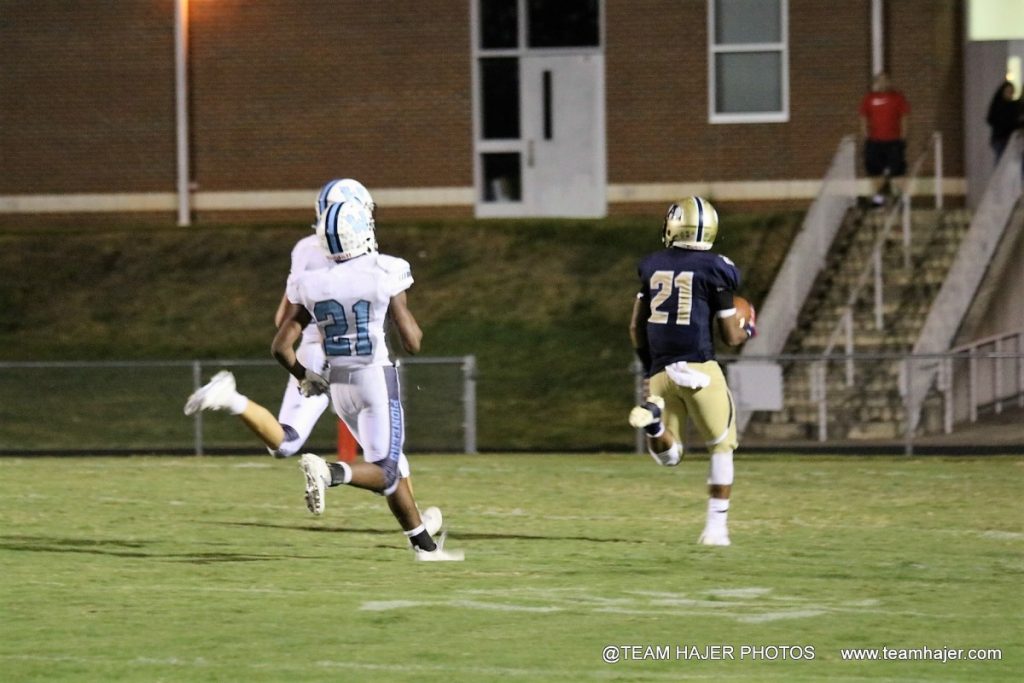 Kendall Flowers is off to the races for Friday’s game-winnig score.