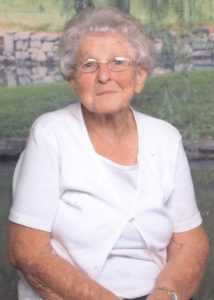 She was born on March 10, 1934, in Caldwell County, the daughter of the late John and Pauline Mecimore Carrigan. Before being a homemaker, Bernice had worked for Clayton Marcus for a number of years. She loved taking care of her family, and was a wonderful wife, mother, grandmother, sister, and friend to all.

Bernice attended Freedom Baptist Church and loved to do puzzle books, card games, and going out to eat. She will greatly be missed, but will forever be in our hearts.

Along with her parents, she was preceded in death by her husband, Shirley Hampton Southard; daughters, Patricia Ann Southard and Mary Lou Scott; a son, Richard Southard; a sister, Aileen Smithey Carrigan; and four infant siblings.

The family will receive friends on Tuesday, October 10, 2017, from 1:00 p.m. – 2:00 p.m., at Dudley Shoals Baptist Church, and the funeral service will follow at 2:00 p.m., with Rev. Brent Collins officiating. Burial will follow in the church cemetery.

Memorials may be sent to Hospice of Iredell at 2347 Simonton Rd, Statesville, NC 28625.