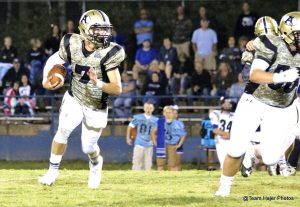 There are some students who set the bar. They work harder, show more passion and lead by example—in the classroom, on the field and within the community. On Tuesday, October 17,   Wendy’s High School Heisman recognized Ashlee Falls and Gunnar Anderson  from  Alexander Central High School and their dedication to never cutting corners by naming them School Winners.
“These students are known by their teachers and friends for their commitment to excellence. We are excited and honored that a program like Wendy’s High School Heisman is also recognizing their hard work,” said ACHS Principal Doug Rhoney.
Since 1994, Wendy’s and the Heisman Trophy Trust have been running the same play to perfection: honoring more than 600,000 of the nation’s most esteemed students. This year, Wendy’s will celebrate the accomplishments of thousands of the best high school seniors, awarding winners in five phases. 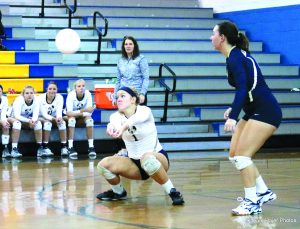 Ashlee Falls in near the top of the senior class academically. She is the daughter of Malinda and Jerry Falls of the Bethlehem Community.  Ashlee is a four-year member of the ACHS Volleyball Program. She served as a junior marshal for last June’s graduation at ACHS.
The son of Cindy and Ron Anderson of the Vashti Community, Gunnar is a standout student in this year’s senior class at ACHS. He is the starting quarterback for the Cougar Football Team. Last fall, Anderson was voted All-Conference in football after leading ACHS to a 7-5 overall record in 2016.
School Winners will receive a School Winner certificate and a Wendy’s High School Heisman Patch. State Finalists will receive a bronze medal, a Wendy’s High School Heisman State Finalist patch,  and a $25 gift card. From the group of State Finalists, one senior male and female will be selected from each state .
For more information or to track a student’s progress through the competition, please visit www.WendysHeisman.com.
About Wendy’s High School Heisman
The Wendy’s High School Heisman was created by Wendy’s founder Dave Thomas in 1994.  Dave Thomas dropped out of high school when he was 15 years old in order to work full-time and went on to become one of the most successful entrepreneurs in history.  While this nontraditional path led to his prosperity, it always worried Dave that others would follow in his footsteps and expect to achieve similar fame and wealth by not finishing high school or attending college.
Faced with this dilemma, at 61 years old, Dave enrolled at Coconut Creek High School in Ft. Lauderdale, Fla., and received his General Equivalency Diploma (GED). Inspired by this moment and with a desire to celebrate the outstanding achievements of youth in America, he launched the Wendy’s High School Heisman program.
Twenty-two years later, Wendy’s High School Heisman has honored more than 600,000 of the nation’s most esteemed high school seniors who share Wendy’s values of giving back to their communities, treating people with respect, continuing education and excelling in athletics.  The Wendy’s High School Heisman is a joint program between Wendy’s and the Heisman Trophy Trust, host and custodians of the Heisman Memorial Trophy®.