The Alexander Central Cougars built a 36-0 halftime lead and was never challenged en route to a 59-21 win over the St. Stephens Indians in NW 3A/4A Football action on Friday night, October 20, in Taylorsville.

Seven different Cougars scored touchdowns and the team compiled 557 yards of offense in the one-sided league win at Cougar Stadium. 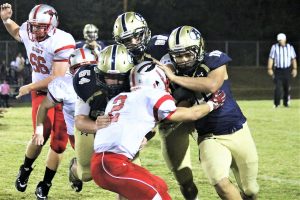 Devon Weiss ran for 100-plus yards for the fourth straight game and surpassed 1,000 rushing yards this season.

With the win, ACHS improved to 9-0 overall and 5-0 in league games. Alexander travels to Hickory High School on Friday, October 27, to battle the Red Tornadoes. Hickory needed a Hail-Mary pass on the game’s final play to knock off upset minded South Caldwell 27-23 on Friday. 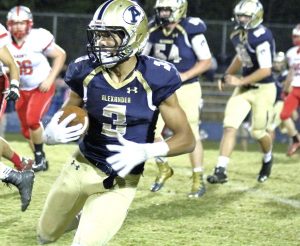 Bryson Godfrey scored twice and tied Chris Scott for the most career TDs in ACHS history.

Godfrey added a 91-yard kickoff return for a TD in the third, while Devon Weiss and Tevin Clark pitched in with TD runs in the second half.

ACHS was seven for seven on extra point kicks in the game. Lisandro Lopez converted four-of-four attempts, while Christian Romero hit on all three of his attempts.

Devon Weiss led the Cougars with 153 rushing yards on 24 carries and surpassed the 100-yard mark for the fourth straight game. In addition, Weiss went over 1,000 yards rushing for the season and became only the fourth player in school history to surpass 1,000 yards two times, joining Chris Scott, Justin Bowles, Â and Bryson Godfrey on that prestigious list.

Godfrey ran for 121 yards and totaled 246 all-purpose yards. He scored a pair of TDs and upped his career mark to 47, tying him with Scott for the most touchdowns in school history.

Through the air, Anderson hit on five of nine pass attempts for 113 yards and scoring tosses to Miller and Flowers.

In other NWC scores from Friday, West Caldwell knocked off Freedom 44-42 and Watauga buried McDowell 61-17.