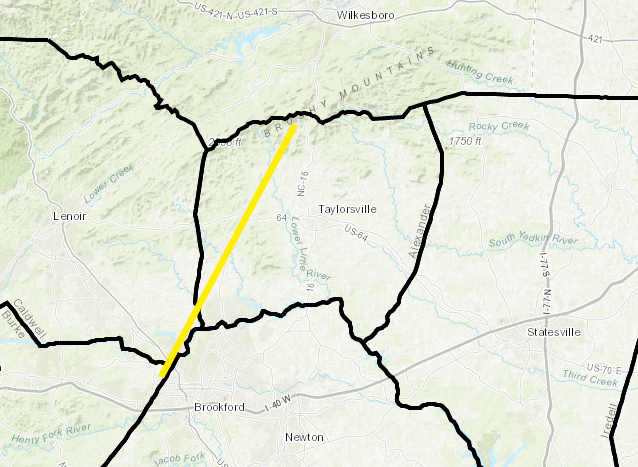 This map, by the National Weather Service, shows the path the Oct. 23 tornado took through four counties, including Alexander.

Meteorologists and storm surveyors have released a preliminary survey of the severe storm of Monday, October 23, 2017, which ravaged western Alexander County and other areas and resulted in tornado activity in the region.

According to the National Weather Service’s Greenville/Spartanburg Office, an EF2 tornado touched down near the Hickory Regional Airport in extreme eastern Burke County, destroying a hangar and planes inside. Initially, the tornado was very narrow, with damage localized to the one hangar. The tornado downed some trees in Winkler Park, then continued northeast straddling the Caldwell/Catawba county line.

While weakening to EF1, the tornado widened to almost 3/4 mile, with damage on either side of Lake Hickory in both counties. Significant tree damage occurred with hundreds of trees downed, many on houses, cars, and other structures. Additional tree damage occurred outside the tornado’s path due to widespread intense straight-line winds. The tornado turned left, narrowed, and straddled the Alexander/Caldwell county line, again resulting in mainly tree damage but with some structural damage from falling trees.

The tornado shifted back northeast, finally weakening and lifting just south of the Alexander/Wilkes county line, west of Highway 16.

Winds in the tornado achieved an estimated maximum wind speed of 125 mph. The tornado path length was 22.83 miles.

For reference, the Enhanced Fujita (EF) Scale classifies tornadoes into the following categories:

NWS staff noted the information in the survey is preliminary and subject to change pending final review of the event and publication in NWS Storm Data. More information and an interactive map that includes the other five tornadoes which hit western NC Oct. 23 are online at http://www.weather.gov/gsp/newTornadoMap.

More storm coverage is found in this article by The Times: https://www.taylorsvilletimes.com/2017/10/26/oct-23-storm-ravages-alex-widespread-outages/