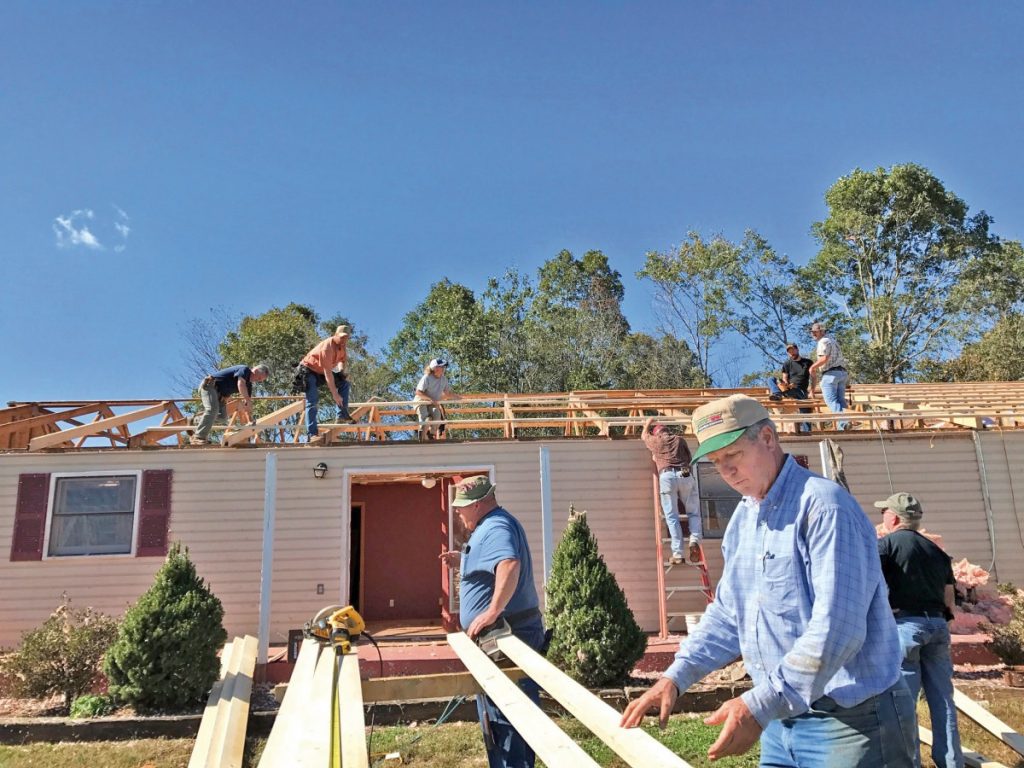 A TIME TO REBUILD — This was the scene on Tuesday, October 24, at Richie and Teresa Herman’s home in the Ellendale Community. Friends, family, and neighbors came together in a time of need, putting a roof back on that was destroyed in the storm. The Herman’s home was one of several that suffered damage in the severe weather Monday afternoon. (Photo courtesy of Allison Brown.)

Severe winds and a possible tornado passed through western Alexander County about 4:20 p.m. through 5:30 p.m. on Monday, October 23, 2017, leaving much damage in its wake and many families without electricity.

“We have had multiple reports of trees and power lines down and structures damaged. Emergency crews, along with DOT employees and private citizens, are still working at this time to clear roadways through several sections of the county,” said Russell Greene, Director of Alexander County Emergency Services, stated on October 23 about 10 p.m. “We have been fortunate in the fact that there have been no reported injuries. Red Cross has been contacted to assist one family due to special needs. Emergency crews will be out tomorrow conducting damage assessments. Upon completion of damage assessments another press release will be forthcoming.”

NOTE: The National Weather Service confirmed the storm was an EF2 tornado. Read more at this link: https://www.taylorsvilletimes.com/2017/10/26/ef2-tornado-confirmed-in-alexander-burke-catawba-and-caldwell/

He added that Emergency Services conducted a damage assessment on Tuesday and thus far have identified 95 structures with some degree of damage. Greene said crews plan to complete remaining section on Wednesday.

There were no casualties during the storm but that sadly changed Wednesday morning during debris clean-up efforts when a tree removal worker died (see more below).

He indicated that at 6:00 p.m. Tuesday, about 5,200 customers remained without power in Alexander County.

Greene noted Tuesday that law enforcement and EMS reported no issues. He stated that a large amount of debris removal would need to be done.

A State of Emergency was declared by the Alexander County government following the storm. The formal declaration enables jurisdictions to seek state or federal aid if needed.

Dr. Bill Griffin, Executive Director of Auxiliary Services for Alexander County Schools, broke the news each day that school would be closed for students on Tuesday, Oct. 24, and Wednesday, Oct. 25, with optional teacher workdays both days. Griffin announced that school would resume on a 2-hour delay on Thursday, Oct. 26.

At Chapman Jersey Farm, located off of Three Forks Church Road in the Sugar Loaf Community, the Oct. 23 storm tore a tractor shed completely apart and flipped its roof onto another barn, damaging the second barn as well. No cattle were killed at the Chapman farm.

High winds ripped the roof off the home of Richie and Teresa Herman in the Ellendale Community, stated Allison Brown who also resides in Ellendale.

A tree fell onto a truck owned by the Holsclaw family, flattening the cab of the vehicle, in the Arbor Springs subdivision in Bethlehem, stated Amy Wallace Holsclaw.

Jeff Propst commented, at a debris clean-up site on Oxford School Road, that he was in Hickory during the storm and saw “trees falling like dominoes.”

Photos by Herman, Chapman, and many other readers were sent to The Times’ via Facebook. There were numerous other reports of yard, tree, and minor home damage across western Alexander. 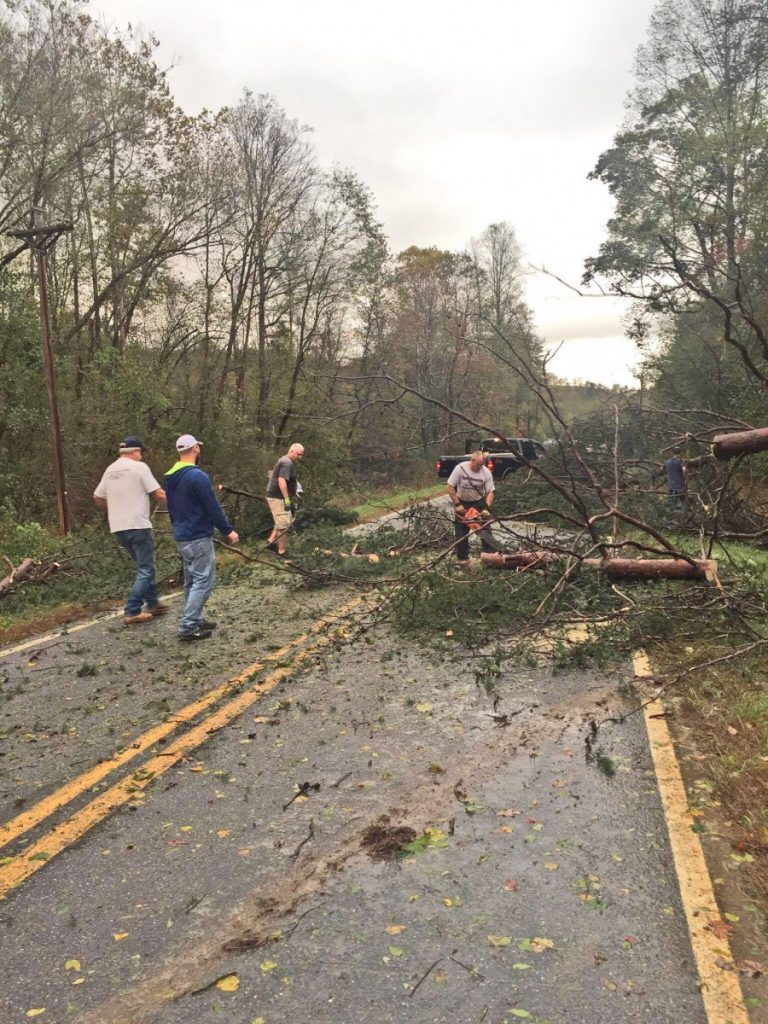 This photo, sent to The Times by Devon Wagoner, shows Mt. Olive Church Road neighbors clearing the road after the October 23 storm.

Alexander County Sheriff Chris Bowman told The Times that at approximately 4:15 a.m. Wednesday, the Alexander County 911 Center received a call that a tree had fallen on an individual near the intersection of Dover Church Road and Mountain Ridge Church Road, in the Ellendale Community.

The initial investigation shows that Wilmoth was operating a chainsaw and cutting a tree that had fallen on a power line. As Wilmoth cut the tree in two, the power lines sprang upward, throwing the tree back onto Mr. Wilmoth.

Shelters operated
The American Red Cross Blue Ridge Piedmont Chapter had sheltering operations in Caldwell, Wilkes, and Watauga counties for residents displaced by the storm. These were closed by Wednesday morning as anyone who stayed in one of the shelters had returned home or found alternative housing.

In addition, disaster trained volunteers are on the ground responding to calls for assistance in Alexander, Burke, Catawba, and Lincoln counties. They are providing comfort, clean-up kits, with items such as tarps, water and work gloves, and health or mental health assistance to help residents begin recovery. Damage assessment has begun in the Granite Falls area of Caldwell County.

As residents clean up, the Red Cross encourages people to remember the following safety tips:

What To Do Afterward
• Continue listening to local news or a NOAA Weather Radio for updated information and instructions.
• If you are away from home, return only when authorities say it is safe to do so.
• Wear long pants, a long-sleeved shirt and sturdy shoes when examining your walls, doors, staircases and windows for damage.
• Watch out for fallen power lines or broken gas lines and report them to the utility company immediately.
• Stay out of damaged buildings.
• Use battery-powered flashlights when examining buildings – do NOT use candles.
• If you smell gas or hear a blowing or hissing noise, open a window and get everyone out of the building quickly and call the gas company or fire department.
• Take pictures of damage, both of the building and its contents, for insurance claims.
• Use the telephone only for emergency calls.
• Keep all your animals under your direct control.
• Clean up spilled medications, bleaches, gasoline or other flammable liquids that could become a fire hazard.
• Check for injuries. If you are trained, provide first aid to persons in need until emergency responders arrive.

How To Help
To make a financial donation to Red Cross Disaster Relief, visit redcross.org, call 1-800-RED-CROSS, or text the word REDCROSS to 90999 to make a $10 donation. Donations to Disaster Relief will be used to prepare for, respond to and help people recover from disasters, big and small.

To donate blood, visit redcrossblood.org to find a blood drive or location near you. 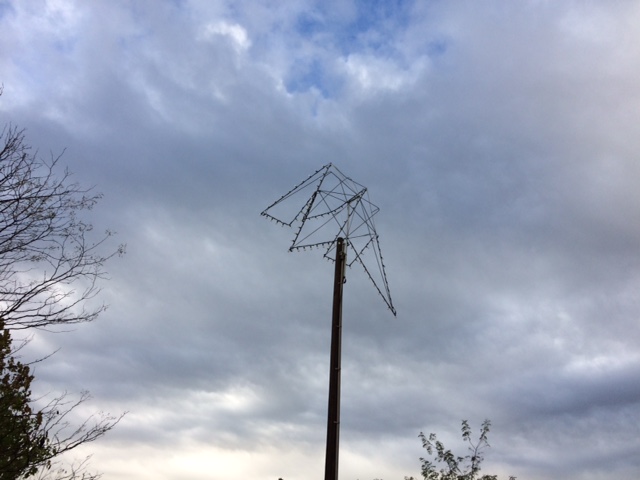 BETHLEHEM STAR DAMAGED — The lighted Bethlehem Star, beneath which crowds gather for the Star Lighting event on the first Saturday evening each December, was damaged Oct. 23 in the storm, shown here. Bud Caywood, of the Bethlehem Community Development Association, said that, despite the damage, the Star Lighting will still take place as planned Dec. 2. 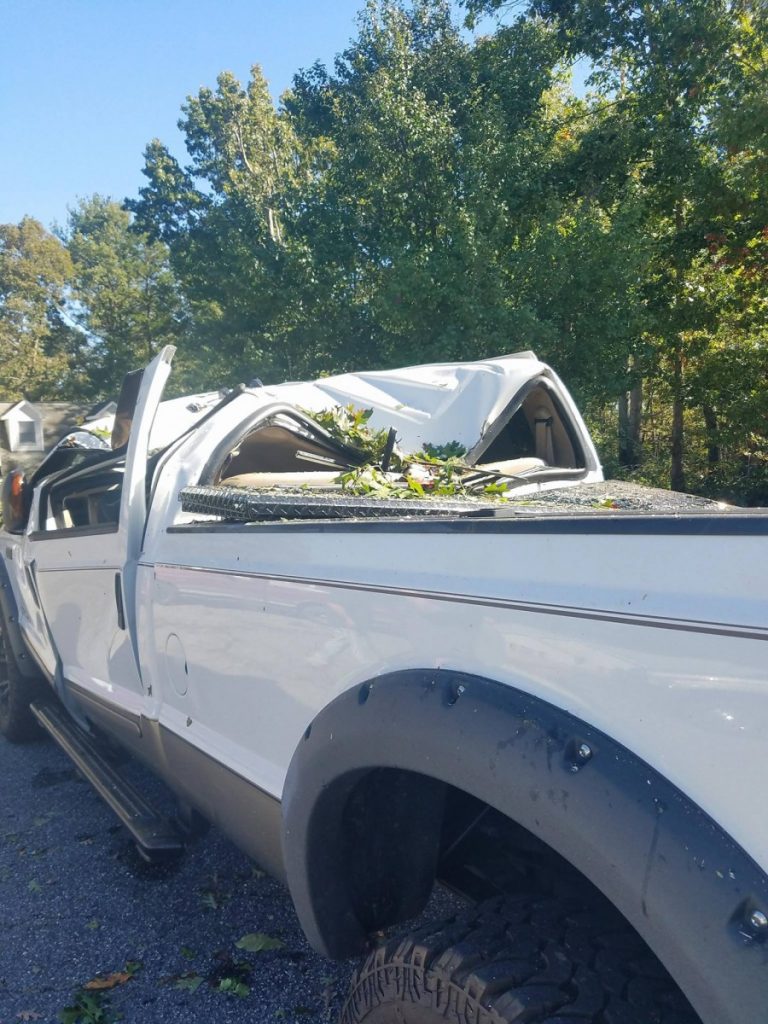 TRUCK FLATTENED — This truck cab was flattened by a tree brought down in the October 23 storm at the Holsclaw home in Bethlehem’s Arbor Spring subdivision. (Photo by Amy Wallace Holsclaw.) 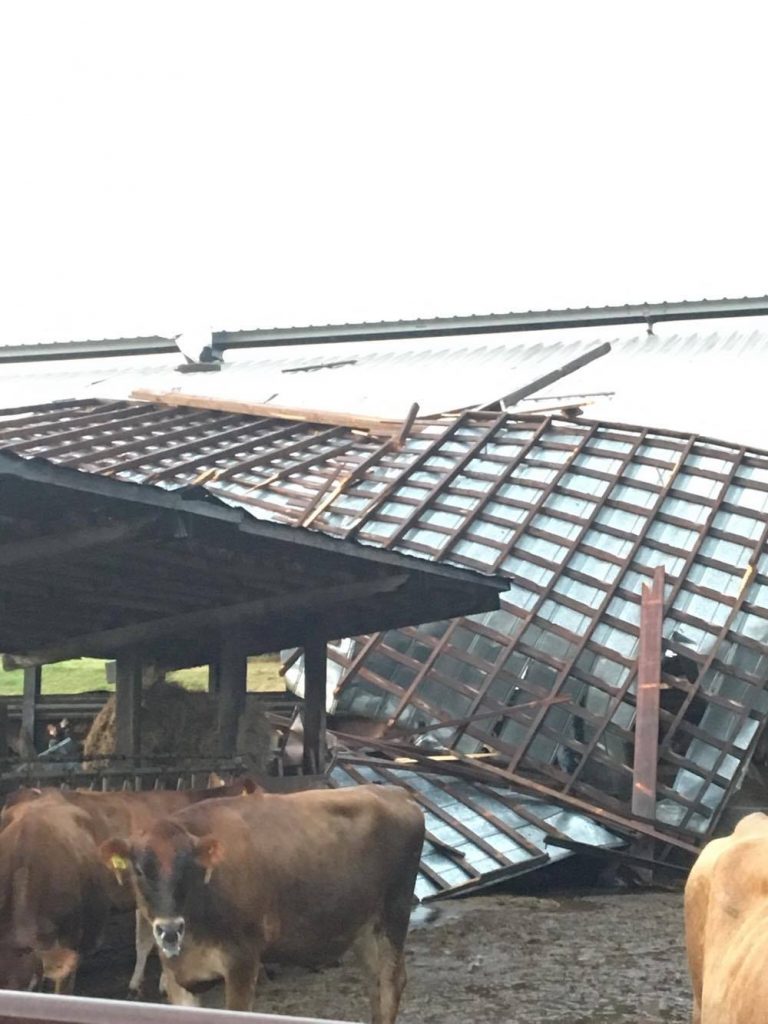 At Chapman Jersey Farm, located off of Three Forks Church Road in the Sugar Loaf Community, the Oct. 23 storm tore a tractor shed completely apart and flipped its roof onto another barn, damaging the second barn as well. (Photo by Amy Fortner Chapman.) 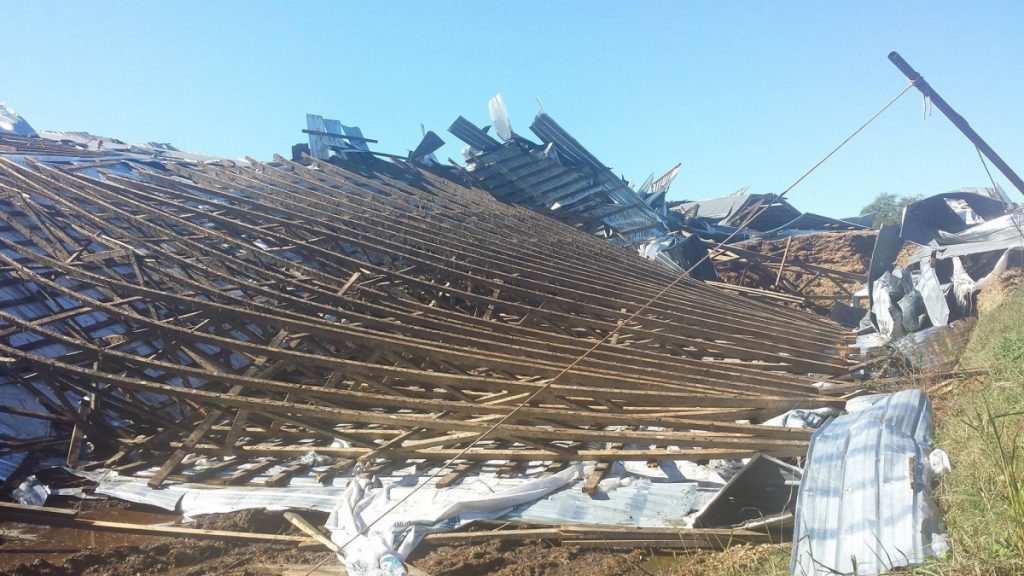 DEVASTATION — This scene shows just part of the havoc wreaked by the October 23 storm at the Herman Dairy Farm in the Ellendale Community. The farm also suffered other damage to structures, as well as livestock deaths. (Photo courtesy of T’neal Herman.) 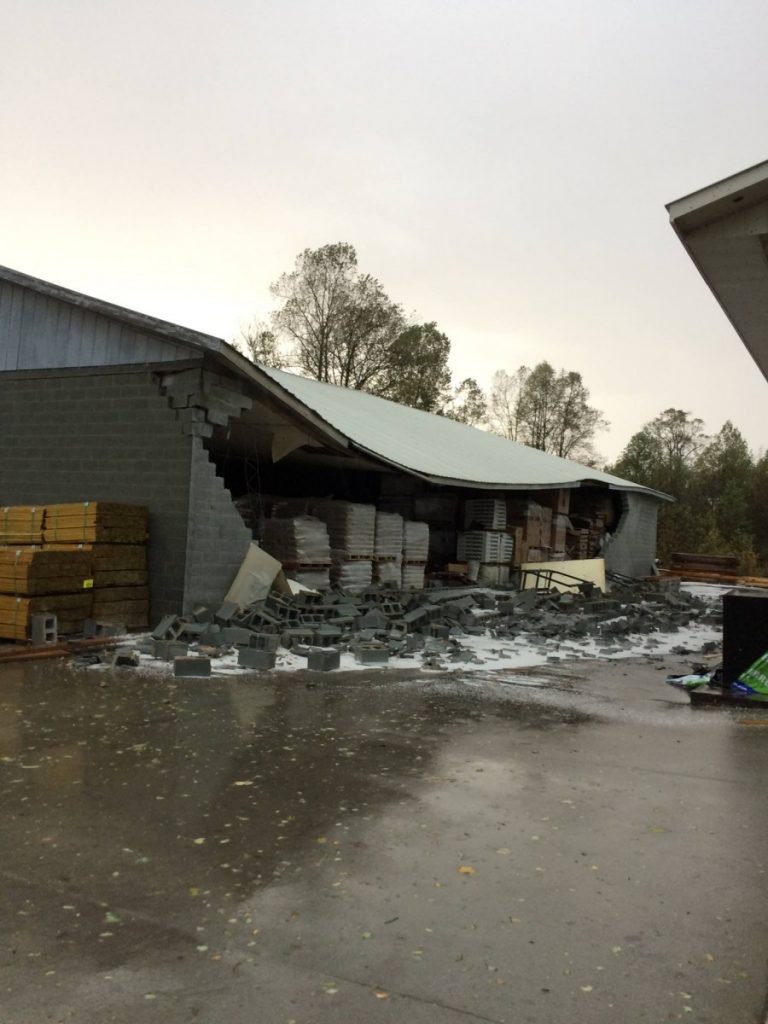 Kevin Sipe sent this photo of damage to Sipe Lumber Company on October 23.