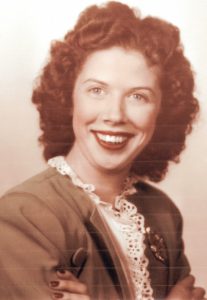 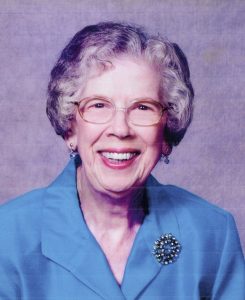 She was born September 6, 1923, in Alexander County, daughter of Rev. Ernest V. and LaVada Robinette Bumgarner. Vivian was raised in Alexander County and graduated from Taylorsville High School in 1941. During school, her favorite subjects were literature and history. She remained an avid reader all of her life.

Following high school, she was trained and worked as a beautician with her older sister, Mabel B. Priester. During that time, she took typing and bookkeeping courses at night. She worked briefly during World War II in an administrative capacity with the War Department in Washington, D.C.

Later, she was employed in Hickory at the Belk Broom Department store in their Accounting Department. In 1951, she moved to Charlotte, where she was employed by the Bank of Charlotte in their Bookkeeping Department. In 1959, she moved to H&S Lumber Co., in Charlotte. During the 70’s, she worked at the Northwestern Bank, in Taylorsville. She finished her professional career working for J.R. Priester Accounting, in Wilkesboro.

Vivian was the youngest of seven children. She was occasionally called upon to assist other members of the family during times of illness, accidents, or deaths within the family. She loved her family and put her own career and interests aside to help when those times presented themselves.

Mrs. Bumgarner was an active Christian and church member all of her life. During difficult times, she relied on her faith. She was a member of Wilkesboro Baptist Church from 1985 until her passing. She was President of, and often taught, the Gleaner’s Sunday School Class. She was an active member of the Solos organization.

During the final nine years of her life, she was an enthusiastic resident of Rose Glen Village, in Wilkesboro.

A graveside service will be held for the family at her home church, Lebanon Baptist, in Alexander County, on Thursday, November 2, 2017, at 3 p.m.

Online condolences may be sent to the Bumgarner Family at www.evansfuneralservice.com.

Evans Funeral Service and Crematory of Lenoir is serving the Bumgarner Family.