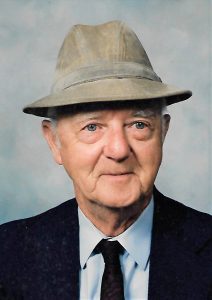 He was born on February 23, 1921, in Iredell County, son of the late David E. Douglas, Sr. and Annie Elizabeth Halyburton Douglas. He was the youngest of 10 children.

Mr. Douglas was a graduate of Scotts High School, and was married for 53 years to Cornelia Bass Hartsell, before her passing in 2001. She caught a bus to Seattle, Washington to marry David, as he was released from the United States Army. He was a life-long member of Midway United Methodist Church, and was a founding member of the Scotts Ruritan Club.

Mr. Douglas was a WWII veteran and served his country with pride. He began his tour of duty in Fort Blanding, Florida. From there, he was shipped to Lahar, France, across the big water as he called it. He was a foot soldier. Overseas, Mr. Douglas was in the 99th Division, once back stateside, the 99th Division was dispersed, and he joined the 2nd Division.

After the war, he returned to Fort Bragg, and then on to Fort Benning, Georgia, where he went to cook school and made pastries. He then was sent to California where he rode in a parade with a couple of Generals, as he put it.

After that, he was sent to Tacoma, Washington, where he received his discharge papers, then caught a bus headed for North Carolina, along with his bride, Cornelia Bass Hartsell Douglas. They traveled by bus for five days to reach his home place, which stands today, on Midway Road in Statesville.

Mr. Douglas worked for himself and operated Douglas Tile and Insulation Co. until he retired to farm the family homeplace along with other lands belonging to neighbors of the community. He loved the land and was at his best when on one of his tractors and plowing the land. It was not unusual to ride up Midway Road and see David bailing hay on your way home, many times with Mrs. Douglas helping also.

Along with his parents and wife, Cornelia, he was preceded in death by a daughter, Rita Gale Douglas in 1977; a son, David Edgar Douglas, III in 2013; six brothers, Clyde, Charles, Russell, Roy, Paul, and John; and three sisters, Mary Warren, Lucy Douglas, and Lorena Goforth.

Funeral services for Mr. Douglas will be held Tuesday, October 31, 2017, at 11:00 a.m., at Midway United Methodist Church, with Rev. Mickey Moree and Rev. Gervase Hitch officiating. Burial with military honors provided by the North Iredell American Legion Post 113 will follow in the church cemetery. The family will visit with friends on Monday, October 30, 2017, from 7:00 p.m. to 9:00 p.m., at Nicholson Funeral Home.