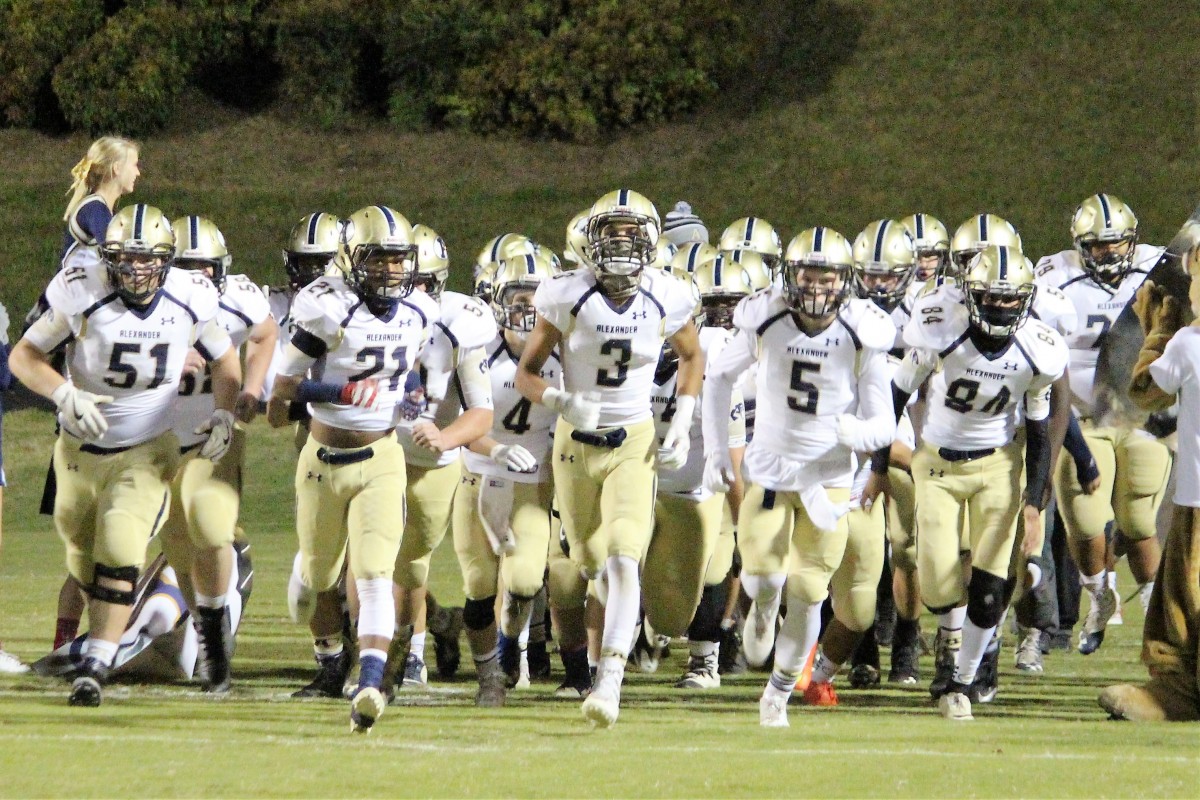 Alexander Central’s dreams of the school’s second ever perfect regular season came to an end on Friday night, October 27, in a 38-28 loss to the Hickory Red Tornadoes at Frank Barger Stadium in Hickory.

Hickory (6-4, 4-2) scored a pair of touchdowns in the game’s final four minutes to erase a four-point Cougar lead entering the fourth period.

Prior to Hickory’s late rally, Alexander battled back from a 24-13 halftime deficit to take a 28-24 cushion into the game’s final quarter. However, Hickory QB Derrien Phillips pulled his team together in the pivotal fourth stanza, leading Hickory on scoring drives of 62 and 38 yards. On the night, Phillips ran for a pair of scores and three a trio of scoring passes to lead his Tornadoes teammates’ upset effort against the previously unbeaten Cougars.

A scoring run by Phillips, coupled with a TD pass to Jaekwon Staton, gave the Tornadoes a 14-0 lead midway through the first period.

After falling behind by two scores early in the game, ACHS responded on its second offensive drive. The Cougars moved 80 yards in four plays and scored when Devon Weiss ran into the end zone on a four-yard run. The PAT made the score 14-7. 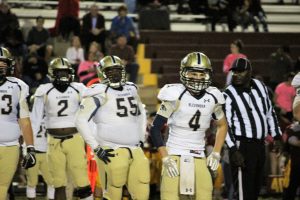 Hickory upped the lead to 17-7 by the end of the first when kicker Harrison Boston connected on a 26-yard field goal with 38 seconds remaining in the initial frame.

Boston’s field goal was prove to be the first of many huge plays for the Tornado kicker and punter on the evening. Boston’s leg resulted in poor starting position for the Cougars throughout the evening as he recorded four touchbacks in seven kickoff efforts. He also used his cannon of a leg to flip the game’s field position with a pair of booming punts in the second half. He recorded punts of 62 and 54 yards and averaged 49 yards per kick on three punts.

“Their kicker was such a weapon for them all night. He dictated field position on kickoffs and really did a great job of flipping the field with his punts. He played a huge role in the game’s Alexander Coach Butch Carter said.

Each team scored a second period TD, resulting in Hickory’s 24-13 lead at the intermission. Weiss scored his second TD of the night early in the second to make the score 17-13.

Late in the second, Hickory used a fake field goal to produce a score when Phillips tossed a 24-yard scoring pass to Kasey Hardin.

Alexander managed to bounce back strong in the third period after being challenged at the half by its coaching staff.

The Cougars dominated both sides of the ball during the third scoring twice and hold the Tornadoes scoreless with dominate defense.

Weiss scored his third touchdown of the game on Alexander’s first possession of the second half. The senior capped a 10-play, 82-yard driving with a 10-yard scoring romp. The two-point conversion pulled Alexander within three points at 24-21.

Late in the fourth, Tevin Clark reached paydirt on a two-yard run. Clark’s run, coupled with Christian Romero’s PAT kick, gave Alexander’s its first lead of the night at 28-24 entering the fourth.

The score stalled at 28-24 until Phillips led Hickory to back-to-back scoring possessions to seal the Tornado win.

For Alexander, Weiss was the workhorse on offense, carrying the ball 25 times for 170 yards and three scores. Bryson Godfrey ran 14 times for 113 yards, while Gunnar Anderson had 14 carries for 83 yards on the ground.

Anderson completed eight of 15 passes for 121 yards with one interception. Kendall Flowers paced ACHS with four catches for 86 yards.

Phillips led Hickory with 121 yards on 19 carries and passed for 110 yards and three touchdowns.

With the loss, Alexander slips to 9-1 on the season with one game remaining. The Cougars still control their own fate in the NWC race. With a win in the season finale at South Caldwell, Alexander Central will lock up the conference championship outright. South Caldwell comes into the game after losing a one-sided affair against St. Stephens 56-7 on Friday.

The Cougars will go for the school’s first conference title since 2017 on Friday night, November 2, at 7:30 pm at Spartan Stadium in Sawmills. 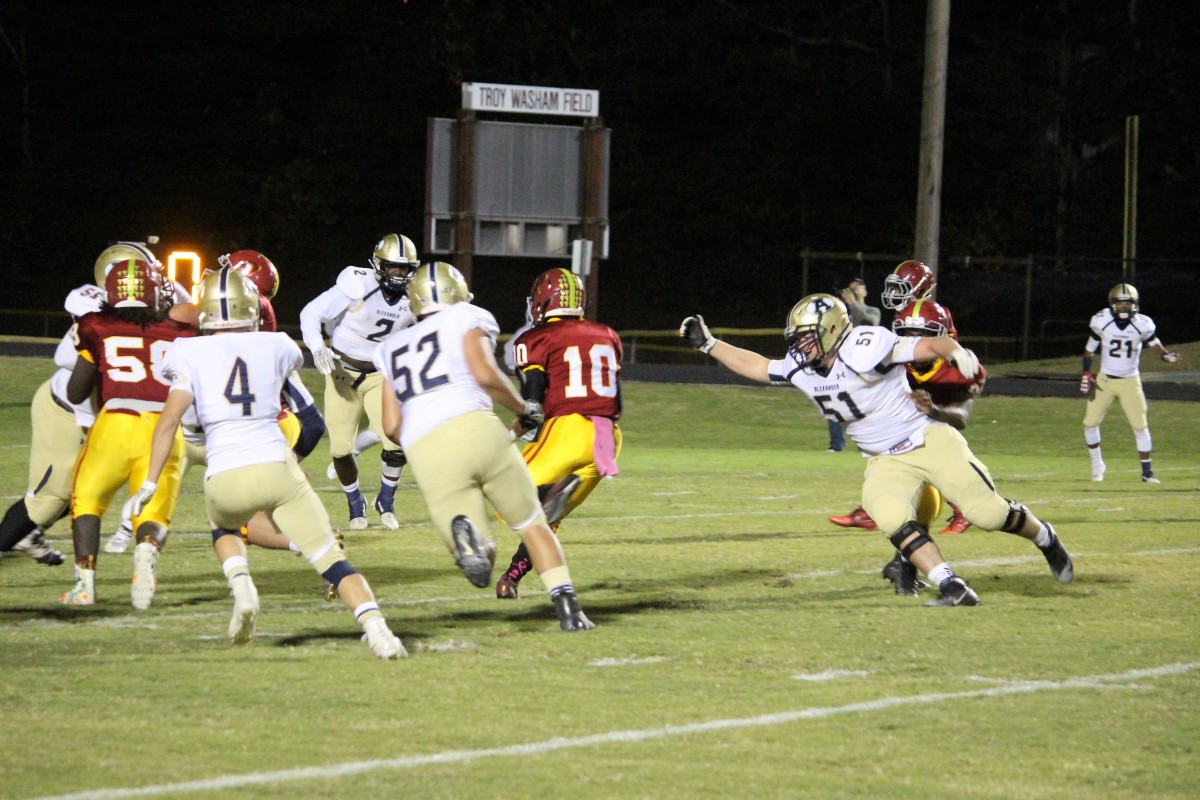 Hickory’s Derrien Phillips eludes the Cougar defense on his way to an early score.