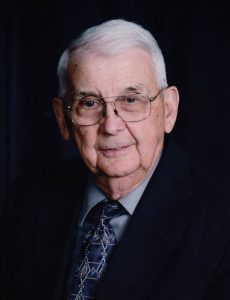 Sam Johnson, 87, of the Ellendale Community, Taylorsville, went to be with his Lord and Savior on Thursday, November 2, 2017 at Catawba Regional Hospice.

He was born on July 21, 1930, in Alexander County, the son of the late Arthur and Dollie Johnson. Sam was retired from Broyhill Furniture, in Lenoir, where he worked as a shipping clerk for over 35 years.

He honorably served our country in the US Army during the Korean War. Sam was a charter member at Oxford Memorial Baptist Church and loved to work outside. He was a loving husband, father, grandfather, brother, and friend and will truly be missed.

Along with his parents, he was preceded in death by his brother, Asa Frank Johnson; and sisters, Christine Johnson Hollar, Millie Johnson, Dorothy Johnson Caldwell, and Margret Johnson Holsclaw.

The family will receive friends on Saturday, November 4, 2017, from 4:00 p.m. – 6:00 p.m., at Oxford Memorial Baptist Church. The funeral service will be held on Sunday, November 5, 2017, at 3:00 p.m., at Oxford Memorial Baptist Church, with Rev. Neal Walker officiating. The body will lie-in-state 30 minutes prior to the service. Burial will follow in the church cemetery. Military rites will be provided by the DAV Chapter 84, of Taylorsville, and Chapter 6, of Hudson.