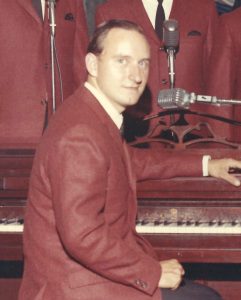 Mr. King was born June 9, 1941, in Alexander County, the son of the late Gladys Dorothy King.

He was a US Army veteran, who served in Korea. Denver had worked as an electrician. He was a pianist for several gospel groups, Singing Spirituals of Statesville, Christian Caravan of Conover, and Singing Christians of Maxton.

He was a member of Taylorsville Wesleyan Church and loved gospel music.

Including his parents, he was preceded in death by a son, Billy King; a sister, Patricia Ann Price; and a brother, Harold Dean Medlin.

Those left to cherish his memory include a daughter, Sara Foster and husband James of Taylorsville; a son, Denver King, Jr. and wife Janet of Hiddenite; seven grandchildren; a sister, Dorothy Conner of Sylvia; and a number of nieces and nephews.

The funeral service will be held at 3 p.m., Sunday, November 5, 2017 at Taylorsville Wesleyan Church. Rev. Aaron Taylor will officiate. Burial will follow in the Liberty United Methodist Church Cemetery with full military honors accorded by DAV Chapter 84 of Taylorsville. The family will receive friends one hour prior to the service.