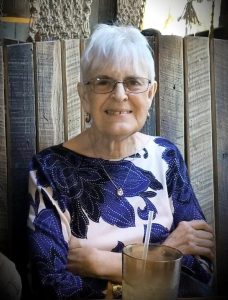 Betty Lou White Worrell, 79, of Lackey Mountain Road, and formerly of Suffolk, Virginia, and the Arrowhead Beach Community of Chowan County, passed away on Saturday, November 4, 2017, at the home of her daughter, in Harmony.

Mrs. Worrell was born in Gates County on January 23, 1938, and was the daughter of the late Lloyd and Mildred Rountree White. A retired teacher in the Virginia Public School System, she was a member of Hiddenite Baptist Church.

In addition to her parents, she was preceded in death by her husband of nearly 54 years, Joseph Robert “Bobby” Worrell, and by her brother, Harvey White.

A memorial service will be held Thursday, at 2:00 p.m., in the chapel of Miller Funeral Home, 304 Main Street, Gatesville, and will be conducted by her former pastor, Dr. James Horton. The private burial will be next to her husband in the Middle Swamp Baptist Church Cemetery. Friends may join the family in the funeral home the hour prior to services.

Another memorial service will be held in Hiddenite Baptist Church on Saturday, November 25, at 4:00 p.m., and will be conducted by Pastor Zachary Deal.

In lieu of flowers, contributions in her memory may be made to Gordon Hospice, 2347 Simonton Road, Statesville, NC 28625; or to any local Hospice organization or chapter of the American Cancer Society.

Online condolences may be made by visiting www.millerfhc.com.