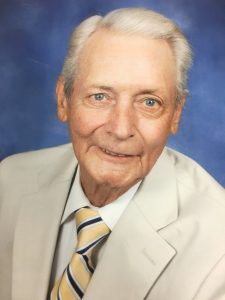 After graduation from Taylorsville High School in 1958, he enlisted in the United States Army and served in Korea, Puerto Rico, and San Antonio. He was a representative for Durham State Capital before starting a second career as a poultry and cattle farmer, which he loved. He often stated that he would not change jobs with anybody.

Roy was a member of Little River Baptist Church and the Adult Men’s Sunday School class. He was a member of the American Legion Post 170, serving as Post Chaplain. He loved carpentry, old cars, and cooking for his family and friends. He enjoyed “vacationing” at the Auto Fair, in Charlotte.

The family will receive friends on Friday, November 17, 2017, from 6:00 p.m. – 8:00 p.m., at Alexander Funeral Service. The funeral service will be held at Little River Baptist Church on Saturday, November 18, 2017, at 3:00 p.m., with Rev. Jeff Chapman, Rev. Mark Robinette, and Rev. Phil Jolly officiating. The body will lie-in-state 30 minutes prior to the funeral. Burial will follow in the church cemetery. Military rites will be provided by the DAV Chapter 84 of Taylorsville and Chapter 6 of Hudson.

Memorials may be made to the Little River Ruritan Club or Alexander American Legion Post 170 baseball team.

Alexander Funeral Service will be serving the Rogers Family.