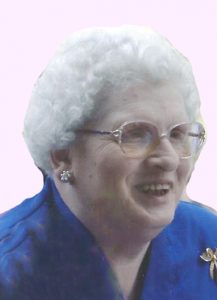 She was preceded in death by her husband, Hall J. Childers; and a brother, Frankie Pearson.

Norine was raised in the Sugar Loaf Community and lived her life there until April of 2009. She was a lifelong faithful member of Mt. Olive Baptist Church, serving in many rolls – choir member, Bible School helper, women’s group, etc.

Following a fall on Easter Sunday, she was treated and moved to Valley Nursing Center in June of that year. Ms. Norine was the model resident there, enjoying the many activities including bingo, penny pitch, move and groove motion, and music therapy, especially the many churches and volunteers who came to sing, have Bible lessons, and celebrate each holiday. She served on the Resident Council, Ringers and Singers, and will be missed by many residents and staff.

The funeral service will be held at 3 p.m., Monday, November 20, 2017 at Adams Funeral Home Chapel. Rev. Monty Mathis will officiate. Burial will be private. The family will receive friends from 2 -2:45 p.m., prior to the service.

Her family wishes to thank the staff at Valley Nursing Center for the care and love shown to her during her eight plus years there. Also, thank you to Alexander County Hospice for their loving care during the last week.

Adams Funeral Home and Cremation Services is honored to be serving the Childers Family.