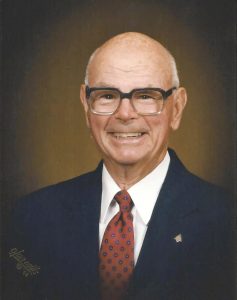 Born on October 13, 1924, in Alexander County, he was a son of the late Ruth Sharpe Hines and Worth L. Hines. Shortly after graduation from high school, he was drafted into the U. S. Navy. He served as a Signalman during his three and half years in service. Most of his time was spent on an LST in the Pacific.

After discharge in 1946, he went to work for Scarborough Chevrolet where he met his future wife, who worked in the parts department. Scarborough later became Bell & Howard Chevrolet, and he worked for the dealership for 40 years.

On July 6, 1947, he married the former Sue Sharpe, who preceded him in death on June 18, 2014. He and Sue were involved in square dancing and camping, and later joined a Square Dance Camping Club that combined the two things they really enjoyed. They offered their own property as a campground to host their friends during the Balloon Rally each year.

Gene loved the Lord, his family, and enjoyed the outdoors, whether it was working in his garden or just trying to find something he could fix. He enjoyed working on cars and was always there to help someone stranded on the highway.

Gene was a member of First A.R.P. Church in Statesville for 34 years, where he served as a Deacon, Elder, and Sunday School Supt. He later joined Pressly Memorial A.R.P. Church, where he sereved as an Elder. Gene and Sue went on several mission trips to help build churches so God’s Word could be told.

Gene was preceded in death by his parents; a brother, George Hines; two daughters, Judy Rankin and Cindy Nash; and a granddaughter, Heather Hines.

Funeral services are scheduled for 3:00 p.m., Tuesday, November 28, 2017, at Pressly Memorial A.R.P. Church, with Rev. Mark Tankersley and Rev. John Kimmons officiating. The family will greet friends at the church for one hour prior to the service, and burial will follow at Iredell Memorial Gardens. Full Military Rites will be presented by the Iredell County Veterans Council Burial Detail.

Condolences may be sent online to the family to www.nicholsonfunerals.com.