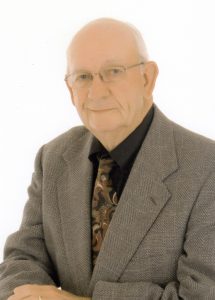 Jerry Ray Starnes, 77, of Bethlehem, passed away peacefully at home, surrounded by his family, on Saturday, November 25, 2017 following a brief illness.

Born on January 26, 1940, in Alexander County, son of the late Loy Hugh and Mattie Corabell Ritchie Starnes, he was a self-employed building contractor and manager of rental properties.

In addition to his parents, he was preceded in death by a sister, Rochelle Roper; and an infant brother, Kenny.

Jerry was founder of Bethlehem Hardware and Oil Company, and was well known as a builder of custom homes. He was instrumental in the construction of the Forgiven Ministry Prison Building, in Taylorsville, and remained involved in their ministry.

He had played golf, but was an avid outdoorsman, hunting and fishing. He was an active member of Bethlehem Baptist Church.

He is survived by his wife of 57 years, Martha Gant Starnes of the home; a daughter, Lisa Alexander of Lake Wylie, South Carolina; and a son, Jason and wife Laura Dagenhart Starnes of Bethlehem. Jerry has four grandchildren, whom he adored, Andrew Little, Jonathan Clontz, Mattie Starnes, and Karlee Starnes. He has one nephew, Randy Icard of Bethlehem; and one niece, Roslin Miller of Asheville. Mr. Starnes has too many fishing, hunting and breakfast buddies to name.

Due to construction at Bethlehem Baptist Church, visitation will be held at Millersville Baptist Church on Monday, November 27, from 6-8 p.m., and funeral services will be held at Millersville Baptist on Tuesday, November 28 at 2:00 p.m. Rev. Dr. Wayne Caviness and Rev. Gary W. Jennings will officiate. Rev. David Ross will assist at the graveside. The body will lie in state thirty minutes before the funeral hour. Burial will follow in the Liledoun Cemetery.

Pallbearers will be: Ronnie, Jeff and Hunter Hartness, Marty Gant, and Randy and Isaac Icard. Honorary pallbearers will be the Adult Men’s Sunday School Class of Bethlehem Baptist Church and his hunting buddies.