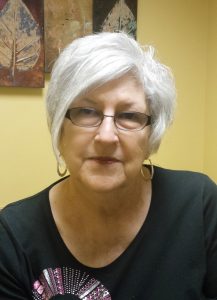 Lena Mae Childers Campbell, 70, of Taylorsville, left this world to enter her eternal home with her Savior on Sunday, November 26, 2017, at Caldwell Hospice, in Hudson.

She was born on October 14, 1947, in Alexander County, daughter of the late Fred Eli and Lucille Bumgarner Childers. Throughout her career, she worked for North Wilkesboro Federal Savings & Loan, which later merged with Wachovia, and then worked for BB&T, in Taylorsville and surrounding communities, where she retired.

During the Christmas season, Lena loved all aspects of the Holiday season. It was one of her favorite times of the year. Lena served as a Board Member for Alexander County Hospice.

She was an avid reader and adored her grandchildren. Lena was a loving wife, mother, grandmother, sister, and friend to everyone she met. She is truly a jewel that will be missed, but will remain forever in our hearts.

Along with her parents, she was preceded in death by her step-mother, Grace Joines Childers, who at an early age became her mother; brother, Grady Childers; and her father and mother-in-law, James and Mary Ethelene Campbell.

Those left to cherish her memory include her loving husband of 47 years, Joey Craig Campbell of the home; daughter, Gina C. Jordan (Matt); beloved grandchildren, Mattie Brooke and Tucker Eli Jordan, all of Taylorsville; sister, Rachel Walker of Iron Station; brother, Dale Childers (Shirley) of Taylorsville; step-brothers, David Dial of Newton, and Gerald Dial of Taylorsville; along with a host of nieces, nephews, friends, and colleagues; and her lifelong friend and caregiver, Selena Harrington.

The family will receive friends on Saturday, December 2, 2017, from 11:00 a.m. – 1:00 p.m., at Pleasant Hill Baptist Church, and the funeral service will follow, at 1:00 p.m., with Rev. Chris Goforth officiating. Burial will follow in the church cemetery.