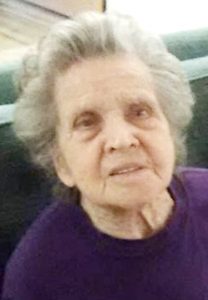 She was born on March 7, 1919, daughter of the late Henry and Emma Hollar Reid. Before retirement, she worked as a knitter and loved gardening. Dovie was a member at Bethel Advent Christian Church and was a former choir member.

In addtion to her parents, she was preceded in death by her husband, Albert Leo Scarbrough; brothers, Arphie and Sam Reid, and an infant brother; sisters, Ellen Newton, Ollie Wilkie, Annalee Hall, and an infant sister; and grandson, John Scarbrough.

The family will receive friends on Saturday December 2, 2017, from 4:00 p.m. – 6:00 p.m., at Alexander Funeral Service. Service will be held on Sunday, December 3, 2017, at 2:00 p.m., at Bethel Advent Christian Church, with Pastor Don Key officiating. Burial will follow in the church cemetery.