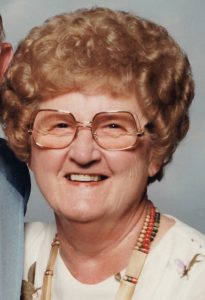 She was born January 28, 1919, in Alexander County, daughter of the late Morris McLain and Florence Miller McLain.

In addition to her parents, she was preceded in death by her husband, Allie “Bruce” Godfrey; a granddaughter, Cilicia Randlett Wicker; and five brothers.

Those left to cherish her memory are her daughter, Cynthia Ann “Chris” M. Randlett and husband William “Bill” Randlett of Hiddenite; along with grandchildren, William Randlett and wife Julie of Georgia, and Chad Randlett of Hickory; four great-grandchildren, Morgan Alise Wicker and Bryant Kelly Wicker III, William Perry Randlett and West Everett Randlett; a brother-in-law; four sisters-in-law; and a number of nieces and nephews.

A funeral service will be conducted at 4:00 p.m., Friday, December 8, 2017, at South River United Methodist Church, 2540 Cheatham Ford Road, Hiddenite. Rev. Douglas Hochmuth will officiate. Visitation will be at the church from 2:30-4:00 p.m. Burial will follow the service in the church cemetery.

The family would like to thank the long-term caregivers for their love and service to Thelma: Penny Harris, Mary Minton, Jessica Hendrick, and Angie Herb.

Condolences may be e-mailed to the Godfrey Family by visiting our website at www.chapmanfuneralhome.com.