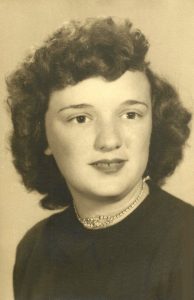 Mrs. Sigmon was born September 22, 1937, in Alexander County, the daughter of the late Fred Barnes and Cleo Richards Barnes.

She had worked in the hosiery industry and was also a homemaker. She was a member of Lovelady Baptist Church. Syble loved to cook and bake cakes and loved her grandbabies.

In addition to her parents, she was preceded in death by her husband, Curtis Earl Sigmon.

The funeral service will be held at 2 p.m., Friday, December 8, 2017 at Adams Funeral Home Chapel. The body will lie-in-state 30 minutes prior to the service. Rev. David Brown will officiate. Burial will follow in the Oxford Memorial Baptist Church Cemetery, Hwy 90 West. The family will receive friends from 5:30-7:30 p.m., Thursday, December 7, 2017 at Adams Funeral Home.

Adams Funeral Home and Cremation Services is honored to be serving the Sigmon Family.