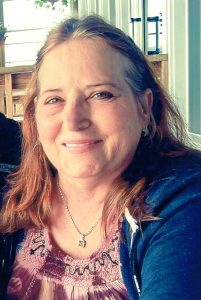 Audrey Jane Buga Hansen Miller, 58, of Statesville, passed away on Tuesday, December 12, 2017, at Catawba Valley Medical Center, after a courageous battle with cancer.

She was born on November 19, 1959, in Sheffield Lake, Ohio, daughter of the late Robert Joseph and Betty Lou Smith Buga and was of the Lutheran faith. Audrey had worked for CommScope – Catawba Plant for a number of years and just loved to be outdoors. She enjoyed family gatherings, traveling, fishing, and hunting.

In addtition to her parents, she was preceded in death by her brother, Paul Buga; an infant sibling; and an infant son, Robert.

Memorials may be sent to the St. Jude Children’s Hospital at 262 Danny Thomas Pl, Memphis, TN 38105.